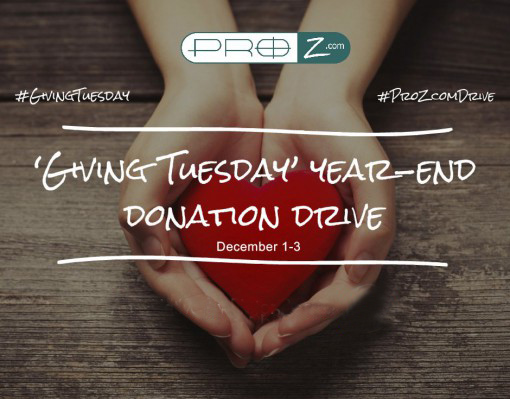 Vertaalt.nu and Proz.com announce to jointly host the #ProzComDrive, a first of its kind charity campaign to fight illiteracy and support disabled children in Africa. The three-day campaign, from December 1st to December 3rd, is directed to raise funds for three causes via Proz.com.

The idea of the campaign originally came from Pieter Beens, a freelance English-Dutch translator, who hosts a charity campaign in December every year. In order to mobilize more colleagues and raise even more funds for an important cause, he joins forces with Proz.com, the leading website with translation jobs, courses and directories.

Fight against illiteracy and discrimination

“This year we’ve together selected four charities that all fight illiteracy and discrimination in Africa,” Pieter says. “Translators know how important literacy is. Without it we wouldn’t be able to read a source text and convert it into a target text. Without it we wouldn’t do what we love. And without it we would never know as much as we know now.”
“Unfortunately there are many people who do not even know the very basics of reading and writing. They have never had access to education,” he adds. “They can never write a letter to their loved ones, or to the agencies that can help them to make the best of their situations. They lag behind the people in their communities who can read and write. When this situation doesn’t change, they will never leave this poor situation.”

The Proz.com team proudly supports this vision and decided to support the campaign in full, says Lucia Leszinsky from Proz.com member services. “We will host a special donation drive around ‘Giving Tuesday’ this year. For every new member that purchases a membership, we will donate $ 10 to the drive. For every current member who renews we donate another $ 5. Furthermore, we will match up all direct donations to a $ 10,000 of total donations.”

ProZ.com is joining forces with Pieter Beens’ in a ‘Giving Tuesday’ year-end donation drive through ProZ.com and invite the entire translator community to join this #GivingTuesday movement in support of the following three (3) non-profit organizations: Concern Worldwide, SOS Children’s Village International and Books for Africa.

In turn, Pieter Beens is also donating 10% of his December income to a fourth initiative: Project Jedidja, a project to fight illiteracy and discrimination among disabled children in Guinea Bissau.

More news will follow in the next few days.

We need your help!

Tips for translators when supporting charities