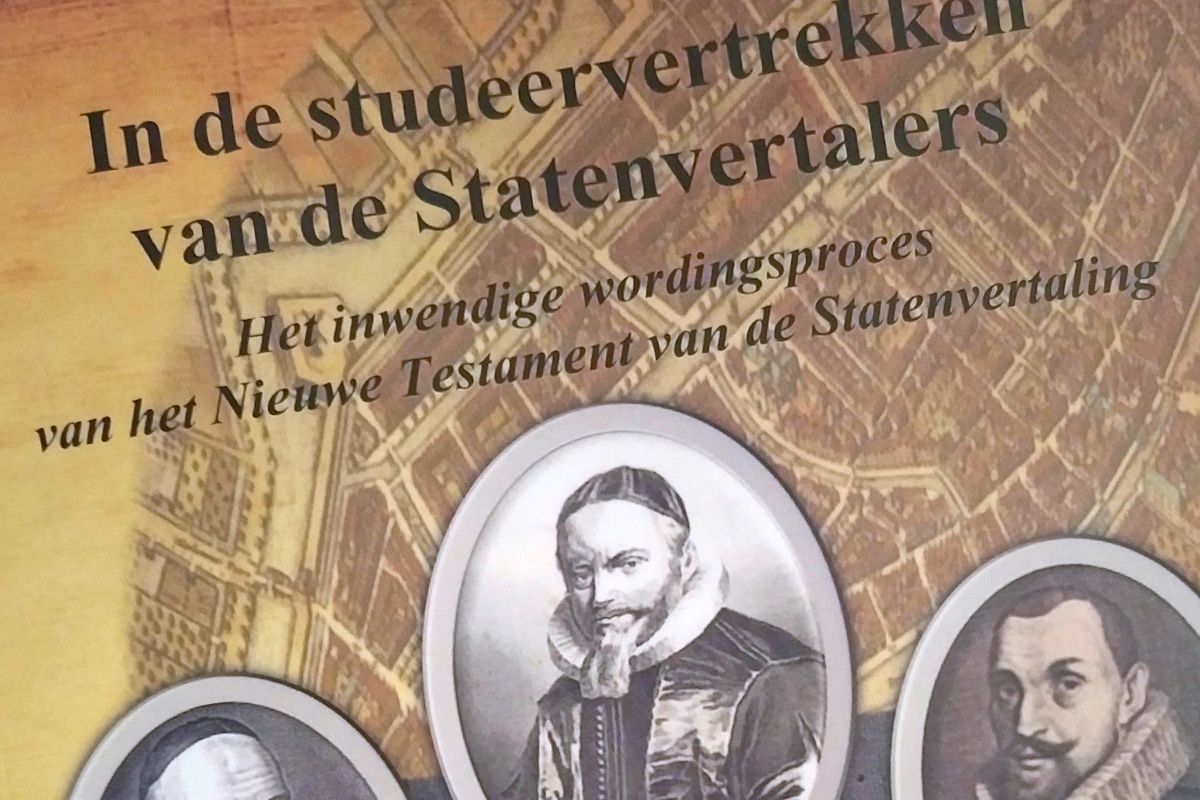 Unveiling the details of a Bible translation

While the Bible is not quite as popular nowadays as a few centuries ago it still remains one of the most read books (if not the most read) of the world. In The Netherlands that is no different than elsewhere in the world. In January, Dirk Jan de Kooter defended his doctoral thesis on the origin of the most popular (and one of the oldest) versions of the Holy Book in Dutch. In this blog post I provide a review of his thesis.

Just as the United Kingdom has its King James Version of the Bible, the Dutch have a Bible translation that was initiated by the government as well. In 1618 the Dutch government ordered the translation of the Bible into Dutch. Until then, people had to make use of different versions of the Bible like Martin Luther’s translation, or old Bible translations that were in fact not based on the original sources but on other translations. In order to give the people of the Low Lands a translation, the Dutch Staten-Generaal (States-General) decided to have the original Hebrew, Aramese, and Greek source texts translated into Dutch by a group of translators. These translators were paid by the Staten-Generaal and completed their work between 1626 and 1635. In 1637 the translation was authorized by the government, after which about half a million Bibles were published.
According to some people, this Statenvertaling (“States translation”, an aknowledgement of the body that ordered the translation) was already published in old and unusual Dutch. Nevertheless it became the most important and authoritative Bible translation in The Netherlands, and kept that position over centuries. Nowadays the Statenvertaling is still seen as the best and most reliable Bible translation by some religious groups, but its authority has nevertheless declined and many other churches and religious groups are sticking with newer translations or even initiating new translations themselves.

However, the Statenvertaling not only carries some authority within Christian communities, but does so also in scientific communities. Linguists, for example, are still researching the breadth and depth of the language that was used, while after almost four centuries many proverbs and sayings in daily life can still be traced back to a particular Bible verse. 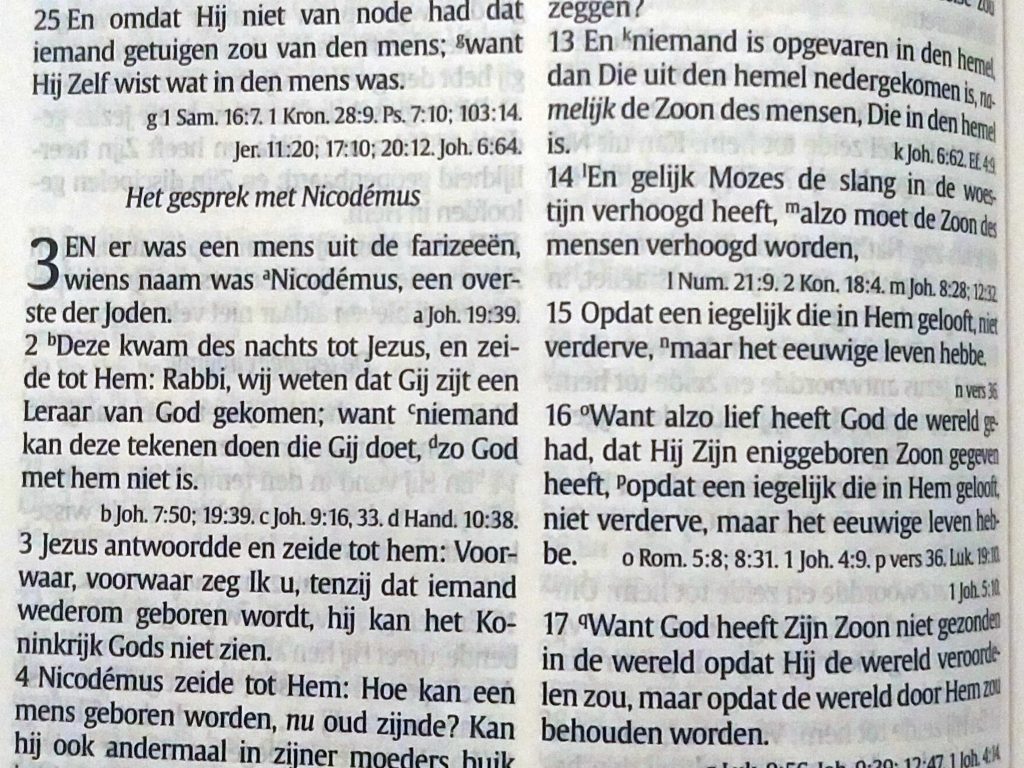 Diving into the origin of the Statenvertaling

It might not be a surprise that over the centuries much research has been carried out on some aspects of the Statenvertaling. People have studied theological and linguistic aspects. However, much was unclear about how the process of translating the Bible took place in the 17th century. Despite the request of a Dutch scientist early in the 20th century to answer the question about the realisation of the Bible translation, the Dutch had to wait until January of this year before they finally learned how the Statenvertaling was ‘born’. Dirk Jan de Kooter then successfully defended his great and comprehensive thesis in which he works out which process the translators followed in translating the most read book of The Netherlands.

To discover how the Statenvertaling actually was made, De Kooter introduced a model for analysis of different Bible translations. Based on the source texts he made a reconstruction of the translation process of the New Testament. Analysis of the texts made clear that a first theologian delivered an initial translation, which then was checked and edited by another. Afterwards, a third peer took care for the linguistic correction of the text. When the translation was approved, a team of involved persons took care of providing explanations of difficult and ambiguous text, the famous ‘Kanttekeningen’ (‘annotations’), which are still used today. Finally a team of advisers commented on the translations, and afterwards the translation was finalized. 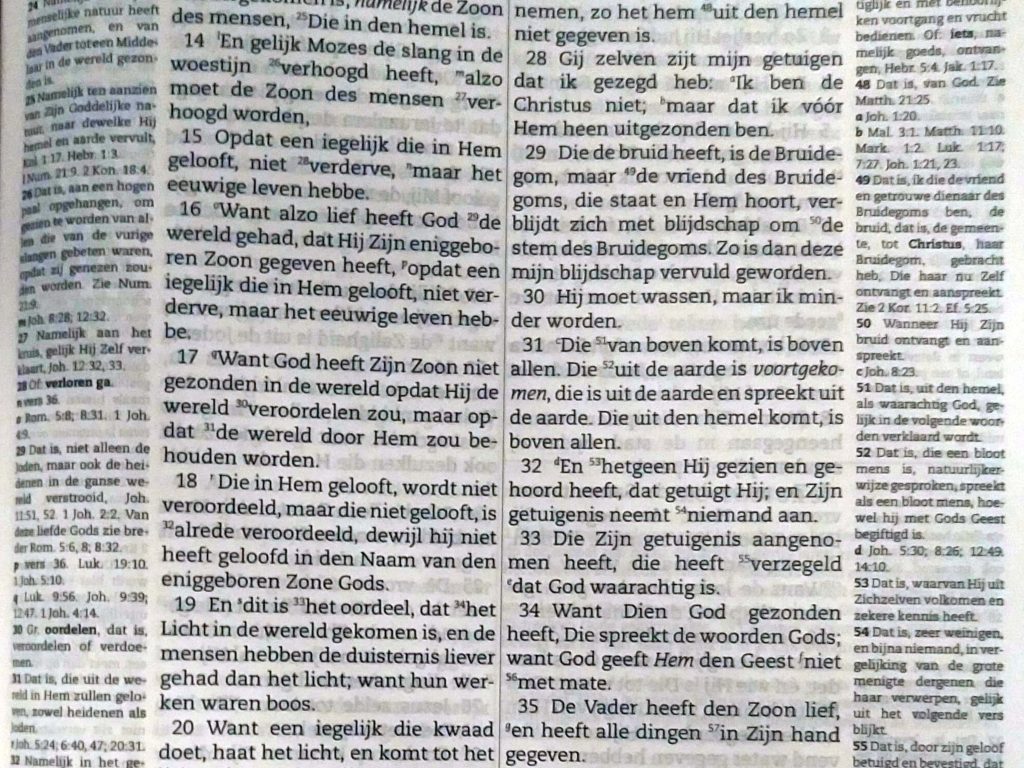 In his comprehensive thesis, De Kooter offers a very detailed analysis of Bible texts to make clear how the Bible translation was done, and how and why the translators chose a particular word or sentence. He is able to show that particular translators used their own wordings, which influenced the translations. He also delves deep into the differences between older Bible translations and the Statenvertaling, comparing their linguistic peculiarities and the possible rationales for particular translation choices.
The result is almost 400 pages (A4!) of a thesis that sheds new and unprecedented light on how time, linguistic background, and personal preferences all influenced the formation of The Netherlands’ most read book. While some people boast about the trustworthiness of the Bible translation, De Kooter makes clear that in this translation many other factors than simply divine guidance played a role as well. He also concludes that linguistic and theological aspects influence each other. De Kooters research is very interesting and a great addition to the existing literature on the Holy Book and its linguistic and social influence. The thesis is available in Dutch only but it deserves an English translation as well, opening doors for academics all over the world to use De Kooter’s methodology to unveil the history of global Bible translations. Reading recommended!

Book reviews, xl8 review
Are we ready to embrace the future?

Previous post Are we ready to embrace the future?

Next post Why some source texts deserve not to be translated

Why some source texts deserve not to be translated