Home / Translation practice  / The race to the bottom 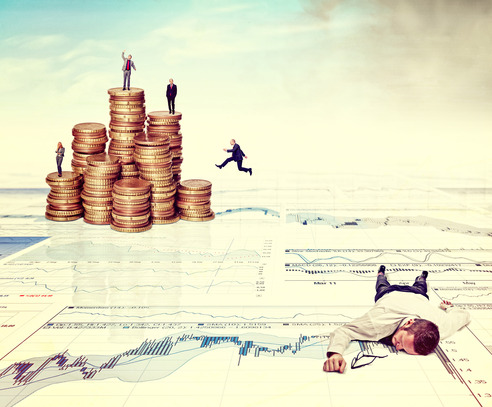 The race to the bottom

Rates in the translation industry have been under pressure for a long time now. Not only are companies increasingly asking to reduce word rates and hourly rates in order to stay competitive, but at the same time translators seem to be increasing their self-esteem and forming a front to defend their professional image and their living. Translators are in a rat race for ever lower rates, to be compensated by something they can’t do (increase their productivity) or won’t do(embrace disruptive technologies). Where will this ‘race to the bottom’ end?

Precisely on the day I planned to write this very blog post, I received two emails from clients with whom I’ve built a long-lasting relationship. The first one asked me to do some formatting on a book translation I had just delivered as ‘this will save the editor so much time’. Apparently the editor was paid per hour; while we had agreed a word rate, the client expected me to do the formatting for free.

The second email was about a small translation, preferably to be done ‘free of charge, as we want to build customer loyalty and we are offering this free of charge as well.’ 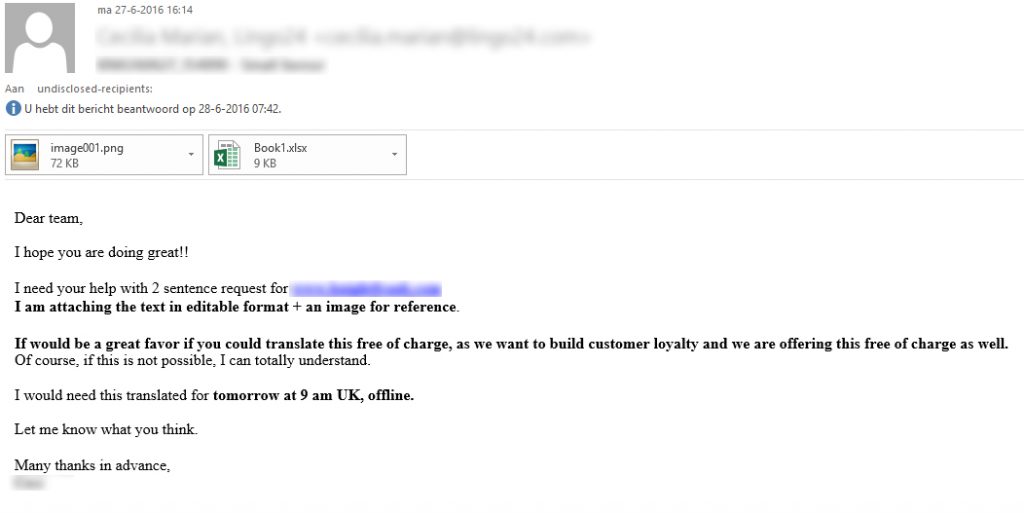 Last week I received a similar email from another longstanding client:

These email texts are becoming the new standard for translators working for agencies: the push for lower rates by end clients is mainly to be compensated for by lowering freelancers’ word rates. That in itself is a normal business practice as all companies that have to deal with lower rates try to cascade them down to their suppliers. However, as long as they allow their clients to press for lower rates without streamlining their businesses or taking firm steps to protect their companies from ever increasing pressure in the future, the burden of poor negotiations is always put on the translator until there comes a time that no negotiation is any longer possible.

The factors that influence lower rates

There has been much written about word rates and the factors that influence them, and of course there is much to be said. The market for translations is, like any well functioning market, driven by demand. At the same time, there are many technological developments, like machine translation and instant translations, that make it easier to create translations faster, both driving and responding to the trend to have translations ever faster. Then there is the role of new translators in the trend for lower translation rates, which Ana Gauz described a couple of months ago: translators do not know where to start, what to ask or how to respond on translation rates.

The “parallel market” for translations

In the last years many translation market places have been opened on the web. Apart from Proz.com and Translator’s Cafe there now are Aquarius, Translator’s Base, Zingbee and Say Hello, to mention a few (not to mention national market places for freelancers, like freelance.nl in The Netherlands). While some of them attract clients that are mostly willing to pay decent rates, many of them are mainly driving competition among freelance translators by offering projects to the translator with the cheapest offer – no matter their mastery of the requested language or their language skills.

On international marketplaces such as Freelancer.com and UpWork.com a totally different community of translators seems to apply to job postings, not hindered by pricing limits and only driven by the need to ‘catch’ a job.

(Frankly speaking, I have posted a job at Freelancer.com in the past, when I was unable to find a specialized translator at Proz.com. My request then mainly received quotes from companies in Bangladesh, India and Mauritius, companies in countries with a lower standard of living – their initial quote for translating a book with 65,000 words from Dutch into British English was $100 – they claimed to provide a translation by native speakers and showcased samples that at best were not translated by native speakers and at worst were unedited Google Translate results.

Of course similar job postings and quotes are made on Proz.com and other higher positioned translation job websites as well, mainly by companies from Asia. But the translator’s community there mainly seems to contain professionals that charge higher word rates and are not willing to lower them. At the same time, the fact that people’s quotes are invisible to competitors, makes it impossible to undercut each other’s rates, and prevents professionals from quoting so sharply that they can no longer pay a living wage.

Because I see (similar) jobs from the same companies time and time again being posted on Proz.com, I assume these companies that push for lower rates aren’t able to find the low prices that they require or want to push the limit even further – probably not realizing all the effort that

The value of a free market

As said, the marketplace for translations is largely demand driven, which means that translators can and will provide translations as long as clients ask for them. That very demand-driven aspect of the marketplace however, also puts the client’s power in his hands. That in itself is not as bad as it seems. It is characteristic of a free market that there is room to negotiate on rates and prices. However, in a traditional free market increasing demand can lead to increased rates, whereas in the free marketplace of translations the increasing demand is increasing the pressure to decrease word rates. As a result of the free market effect combined with technological trends, end clients try to lower the prices for translations as much as possible in order to increase their margins and/or to make their products more competitive. Agencies, on the other hand, try to increase their margins and lower their rates in order to position themselves as competitively as they can.

The danger for a never-ending race

Until now, end clients have been able to push word rates to an ever lower level in order to increase their margins. Agencies have, in turn, conceded to clients’ requirements in order to win or maintain business. To maintain their margins however, they have put the whole load on the shoulders of freelance translators, the party on the opposite end of the translation spectrum, who is not in a position to convince end clients of the value of a good translation. Given the attitude of many project managers, who celebrate huge workloads and fast-paced translators, and small translation agencies, who try to gain translation jobs in order to increase their incomes, it is questionable whether they have ever convinced their end clients.

While winning a bid for a huge translation job can result in more work, it actually offers only some relief in the short term (often for only four to six years, as is the case with many tenders). In the long term, companies have maneuvered themselves into a position where it takes huge effort to maintain their low rates yet there is a chance that end clients can still negotiate a better price because of the attackable position of the agencies.

This will result in a never-ending race for ever lower compensation that in the end will lead to a loss of businesses, agencies, translation quality and translators.

What can translators do?

Negotiating on translation rates in itself is not wrong. Having different rates for language pairs all over the world is not wrong as well, because geographical characteristics, like lower standards of living, lower housing rates and lower food prices can positively impact your word rates and business. Translation agencies however, should not expect from translators that they can readily lower their prices simply because they (or their end clients) demand they do so. There is nothing wrong with negotiating on lower prices, but companies should seek alleviation and higher margins in their own processes, not from their suppliers alone. In a free market, bodices are odious.

There is no obvious solution yet to avoid this downturn of rates. The best way to prepare however, must be to have a fixed line; crossing that will make it impossible for translators and agencies alike to do business any longer. A set minimum fee makes it easy to identify which rates are really necessary to earn at least a decent living; if that fee is undercut, it doesn’t pay any longer to work for a living, so it will be impossible to work at all. If all translators had that attitude, agencies would discover how difficult it is to negotiate on lower rates any longer and would do a better job in dealing with end clients. Rates can then still fall far , but a race to the bottom will be avoided.