Home / Academy  / The blockchain for translators 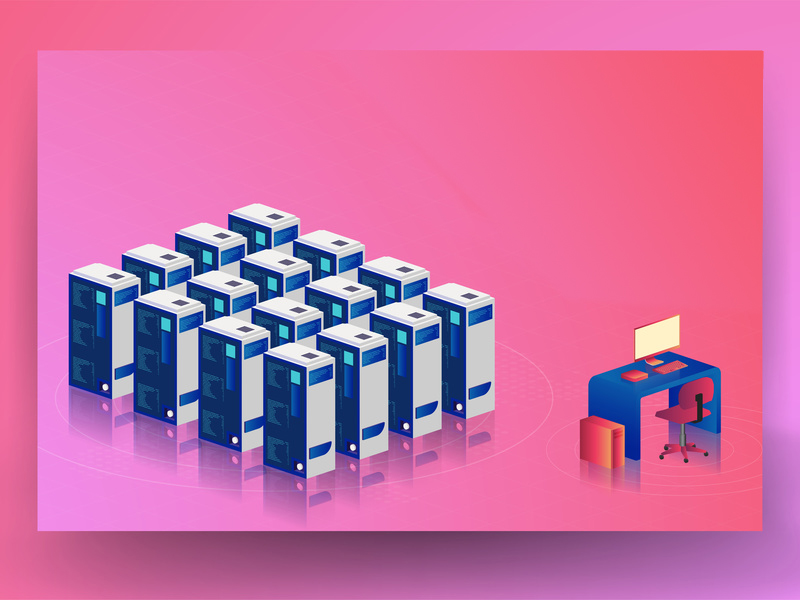 The blockchain for translators

The strong rise in the Bitcoin’s price caused a great deal of interest in the underlying technology. The blockchain seems to be the technology of the future. But what is blockchain and what can you do with it?

The blockchain as a buzzword

The term blockchain has become a buzzword. When Bitcoin broke record after record last year, many parties became interested in the technology behind the cryptocurrrency. Meanwhile, large companies are researching the possibilities of the blockchain and in even less obvious sectors, such as the translation sector, there is interest.
Yet the technology has been around for at least a decade. As early as 2009, ‘Satoshi Nakamoto’, the anonymous developer of Bitcoin, laid the foundation for the technology to take off in the future. Nakamoto was looking for a way to prevent the same money from being used more than once; his blockchain proved to be the ideal solution.

What is the blockchain?

Because the block chain is a digital environment, it is difficult to imagine it. Yet the term itself offers a hint: in fact, the block chain is nothing more than a chain with information blocks.
This description is a bit limited though. Each block consists of three components: the stored data, a security code and the security code of the previous block. The security code – the so-called ‘hash’ – is related to the data stored in a block. If information is added or removed in a block, the hash must be recalculated. The new hash can be compared with the old one, so that you can see at a glance whether something has changed.
Because each block also contains the hash of the previous block in the chain, tampering is almost impossible. If information in a block is tampered with, the hash of that block changes and no longer corresponds to the hash of the next block. In short: one broken link damages the entire chain.

Still, users needs to exercise caution. Modern computers are so fast that they can calculate hundreds of thousands of hashes per second. In theory, therefore, they can adapt all hashes retroactively. That is why the blockchain has a ‘proof-of-work’ that slows down the making of new blocks. If a block is tampered with, the proof-of-work for each block must be recalculated. With the Bitcoin, this takes 10 minutes. This makes tampering practically impossible.

Everything in the block chain is about decentralization. The blockchain is not located on one server, but each user gets a full copy of the chain. This creates a network of similar users. Each network has a central node that uses all copies to check if the information in the blockchain is still correct. Blocks that have been tampered with are rejected and banned from the block chain.
It is precisely this decentralisation that makes blockchain technology attractive to both investors and visionaries. Because each user has his own copy of the entire chain, the authority and final responsibility lie with the user. As a result, there is no need for a specific body: no one is the exclusive owner who can measure up someone else, create obstacles or charge unnecessary costs. And because the data is spread over several computers, the technology is, in theory, more quickly accessible and more difficult to hack.

Success as a bottleneck

However, decentralisation is also a weak link. This was evident, for example, when massive numbers of Bitcoin investors sold their minted currencies at the peak of the exchange rate. A lot of steps are needed before a transaction is finally approved and executed.
Every transaction has to be verified, after which a new hash hash has to be calculated after every change, proof-of-work takes place and the change in a block has to be shared with all users. At peak times of 20 to 30 transactions per second, this leads to enormous congestion; in the case of Bitcoin, users have sometimes had to wait days for their sales to be approved or confirmed.
For a moment, the block chain technology seemed to be ruined by its own success. After all, you won’t paying for a pizza with Bitcoins and only eat it two days later because it took that long to confirm the transaction. Such problems can only be solved by even larger networks and by further optimizing the technology so that transactions can be executed faster. 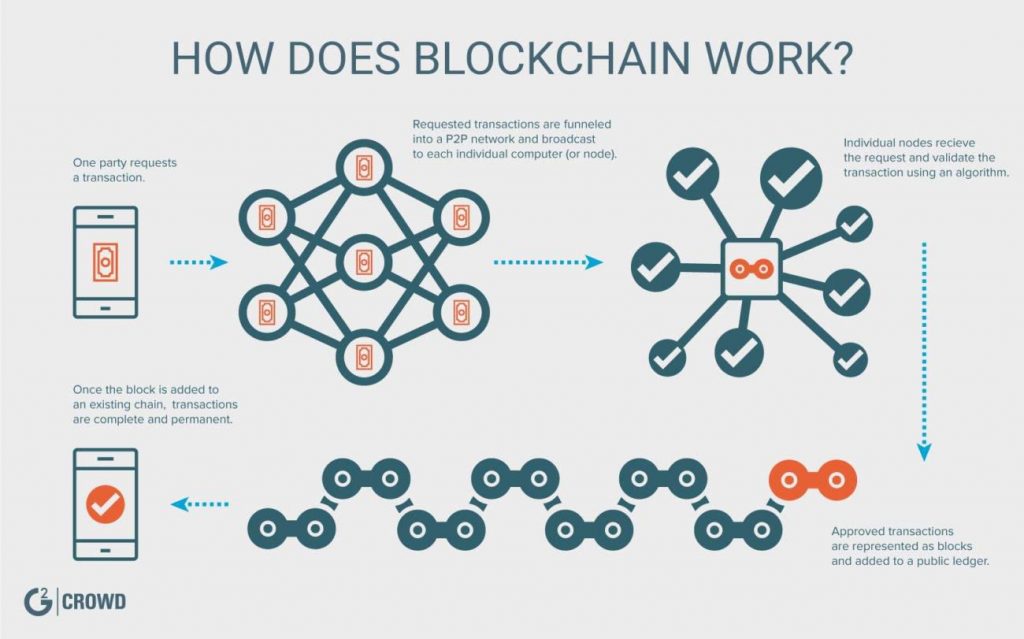 Explanation of how the blockchain works. Source: CNet

For the time being, cryptographic coins are the best-known example of block chain technology. Nevertheless, advantages such as decentralization and extensive security technology giants offer sufficient leads to explore other applications. Because the blockchain provides insight into all transactions from start to finish, the technology can also be used in other sectors.
For example, the Swedish company ChromaWay is testing the blockchain for the transfer of real estate, so that the notarial deed and associated costs can be avoided. And in the Netherlands, Philips is working on a system to store medical information about patients.
Before that happens, some problems still need to be overcome. Not only must block chain systems be able to carry out massive transactions at lightning speed, but it has also became clear on several occasions in the past few months that the system is not yet able to keep hackers and crypto thieves out of the process. Only when these teething problems have been solved can the block chain be used more widely.

The blockchain and the translation industry

In the meantime early adopters and visionaries in the translation industry are also trying to jump on the bandwagon. Back in May this year, CEO Ofer Shoshan of One Hour Translation explained in a sponsored post on Slator.com how neural MT and the blockchain will change the translation market for good. Shoshan sees the blockchain specifically as a facilitating technology for neural machine translation. For him the blockchain could make our translation memories available instantly. ‘To make these TMs readily available, there is a need for an easily accessible repository or some sort of a marketplace. The minimal requirements are to make it easy to search the source content while ensuring that the translation is delivered only upon payment, and to eliminate the need to trust a central vendor that will manage it all’, Shoshan says.
The decentralisation of the blockchain concept could be beneficial to avoid privacy issues.
‘Using blockchain-based architecture, it is possible for TM owners to earn income without risking their data privacy. TM owners like companies, translators, etc., will be able to share their data in a way that will only expose it once payment is made’. Shosan envisions that ‘Customers will be able to select the translation data they want based on metadata (like rating), and translators will be able to upload their translations for common phrases and get paid every time someone uses them (pay-per-use)’.

In a post on The Open Mic Thomas Lespes-Muñoz, multilingual digital marketer at 2M Language Services, explores some other opportunities for the blockchain in the translation industry. To him, a blockchain system could mean faster payments to freelancers and clients because a bank is no longer needed. That idea itself is not new as this is the basis for the Bitcoin currency. However, Lespes-Muñoz’s approach to contracts could work well. In his post he states that ‘A smart contract is like a classic contract between parties except it is fully digital; it relies on blockchain technology to stay secure and public. Because the smart contract is stored in a blockchain technology, it is extremely hard to change its terms and impossible to do so without other parties being notified. LSPs and clients sometimes work with complex contracts that involve many parties. By using smart contracts, parties can make sure that the terms of the contract are being respected at all times and that all transactions or actions triggered by the contract only take place when the contract is executed’. While I have not had to deal with any unilateral contract changes or breaches until now, this approach to contracts can open new opportunities to safeguard the position of both freelancers and agencies.

The blockchain for freelance translators

The future will definitely reveal more (and more innovative) opportunities for use of the blockchain in the translation industry. For now however, the technology still needs to be explored and is too expensive and complex to be implemented. Furthermore, as long as companies can continue their work in the traditional way, and no disruptive companies emerge , much will stay the same. Once the technology is ready to be implemented on a huge scale, freelancers will be required to translate software and change some of the processes to reap the benefits and not miss out on new jobs. However, given the impact, complexity and budgets involved, that will take years. Until then, the technology is best positioned for companies willing to sell their TMs and make neural machine translation accessible.

Next post The seven habits of highly effective translators