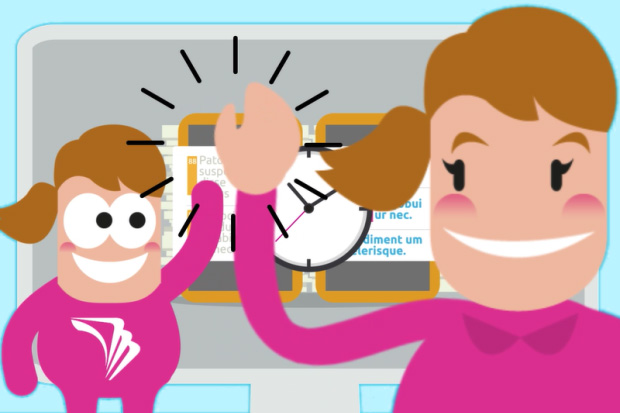 As the regular visitors of this blog might have noticed, the frequency of new articles is quite … unfrequent. But now I am struck by something very cool and promising: Slate Desktop on Indiegogo, a tool that will offer freelance translators and small business to one of the most promising (and unavoidable) technologies in our industry: that of machine translations.

What is Slate Desktop?

Slate Desktop was announced lately on Indiegogo, a crowdfunding website. The software isn’t released already, but I think there’s already something being developed (not sure though).In short, it is a piece of software that uses your translation memories in order to machine translate texts. The algorithm will learn one’s style and tone of voice and will use the content of translation memories to produce machine translations – which one only should edit in order to finalized it. So, Slate Desktop will allow professionals with translation memories to have a machine translation tool for their own.
The development team started a crowdfunding campaign to get thoughts of professionals on the added value of the product and to check whether there is a market for it. I think there is: the campaign started in September and will last until the end of this month. They’re halfway their campaign and raised half the money. A bit more exposure and they’re set. And we too.

Please view the marketing video of the developers below:

The core strength of Slate Desktop is that it makes a translation engine available for mere freelancers and small companies. All you need to have is a translation with at least 100,000 segments (that’s an achievement on its own, I admit) but you can also combine several TMs in order to have 100,000 segments. So you can also combine all TMS you created once and use this combined knowledge to create your own translation engine.

Another major advantage is the price of the product: in order to get at the front of the new technology, you should pay a ‘perk’ on Slate’s page on Indiegogo. That’ll take you USD 330, less than you will pay for a Trados or MemoQ license1 (although you need one to get Slate Desktop running).
Compare that with the thousands of dollars companies now need to pay to get their own translation engine developed and you know that this product for sure fulfills a need. That becomes more clear when you realize that it is mere software that will do the trick – you do not need to invest in further infrastructure or systems.And because all is done at your PC, you don’t need to be afraid for the cloud – with all it’s technological and ethical caveats.

A major sales argument for Slate Desktop is that it doesn’t rely on the cloud. All processes are run on your local PC, so there’s no need to upload to or process in the cloud – with all its confidentiality threats from that. Slate Desktop therefore can be used without headache about any signed NDAs.

The most important advantage however is still the result. The developers of Slate Desktop claim that the software will learn your language and copy your style. So, when you input enough, it will output a copy of yourself (not literally, for sure). That will in the end save you much work: all you need to do is run the software, make some minor improvements and send the job back to your client. No-one will know that you had your own personal assistant doing the job.

However, it’s not all gold that glitters. As said before, in order to get your own translation engine running, you should have at least 100,000 segments. That’s quite much, but not impossible. And fortunately you can combine multiple translation memories in order to get the work done.
Once you have combined these TMs, Slate Desktop will analyse them and do it’s wonderful job. However, you should save some hours for that and let the software do its trick at night ideally: I bet it will consume much of your resources and slow down your efficiency and productivity in daytime. To make most use of it, you should handle it outside your business hours.
So far there’s much unknown about continous support and license options. I’m not afraid for that and guess it will be good, but it’s still a mined area and investing is at your own risk.

And than the ethics and copyrights: how about combining TMs from clients our using resources with segments you didn’t translate all on your own? In many cases you signed NDAs which prohibit this use – although this is a gray area as well. If you may use them, the software will get stuck on a variety of styles and tones. That won’t affect the results positive initially…

Slate Desktop is a kind of revolutionary software. Any alternatives are custom-made and expensive. This software uses straight-forward databases you have available, runs on a normal PC (although you should invest in some computing capacity in order to fully benefit of it), and can update your translation engine when you need it. In short, there’s no need for expensive and time-consuming resources. And once it will have earned some market-share there’s less chance it won’t be supported for long: the market of machine translations is growing steadily and more and more companies and freelance translators are investing in it. Chances enough for Slate!

The most important threat to Slate Desktop is currently the fear for machine translation – one I understand fully. Mainly freelance translator’s are looking to translation engines and PMT suspiciously and when they won’t back Slate Desktop, there’s a chance the software will never make it.
The other threat is coming from the ethical side of business: when using it with the resources we have available will mean a breach of contracts, we should never use it unless we have gathered our own resources. In that case it’s currently not worth an investment.
And as with TMs: when you are not specialized in a particular field and have a quilt-like TM with texts from many different fields, there’s a chance Slate won’t work effectively. Perhaps the software works better when you have 100,000 segments about a specific subject than when you have 120,000 with texts from IT, Marketing and Fashion alike (to mention a few).

I guess I will buy a perk soon. Just wondering what you think, wonderful colleagues! Post your thoughts below!