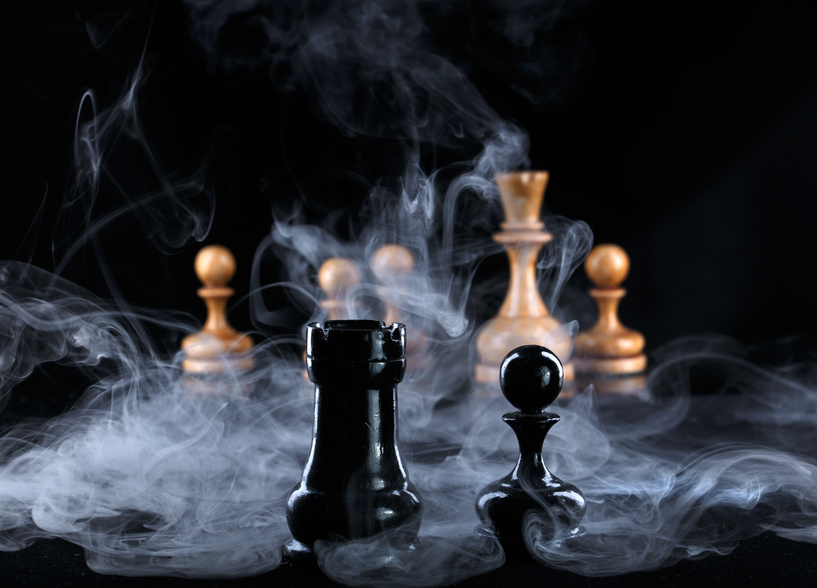 A second chance for defaulters?

Doing business means taking some risks. Although one freelancer might be more likely to take risks and others want to stay on the safe side, every freelance translator will find themselves in a position of financial troubles at least once. Sometimes these troubles are caused by one’s own financial mistakes while in many other instances they result from poor business and bookkeeping practices on the client’s side. Although these practices can have serious personal consequences, they are great moments to learn from. One interesting lesson is that patience sometimes can do more good than ending a customer relationship.

Translation agencies for the blacklist

Stating that many companies are suffering from a poor cash flow and that the crisis has worsened is, in many cases, a truism. The same applies to stating that all freelancers sooner or later will deal with a customer who is slow to pay or even one who will never pay. Sometimes the poor payment behavior is a result of reasons beyond one’s control but in some cases the client is deliberately posting translation jobs and intending never to pay. Thanks to the internet, professional translators are now warned of such agencies via Facebook and LinkedIn Groups. Googling ‘Translation agencies blacklist’ will also unveil a world of freelancers who make an effort to blacklist all those translation companies that do not have high ethical standards.
In my first years as a freelance translator I felt prey to one company, who in the end turned out to be a much bigger predator than I ever expected (more about that later).

In many other cases however, late payments are caused by other factors. Translation agencies – more than end clients I suppose – have to deal with big companies that set their own payment standards and internal controls that make it difficult for those agencies to control their cash flow. In that case they are unleashing a reaction that can have far-reaching consequences: agencies will pay translators later, while translators struggle to pay their debts on time, and sometimes even have to lend money or to ask for payment extensions, thus running into ever greater trouble.

For translators there is only one good way to deal with such clients’ cash flow problems: by having a good cash flow themselves and making sure there is always some money remaining so as to avoid an empty bank account. Although it can be very frustrating to wait for your well-deserved money and have to call companies to live up to their agreements, having your own cash flow on track gives you some time to deal with poor payment practices (and to resolve them), while you also lend your client some time to get back on track as well.
On the other hand, you should make sure that you are not acting as your client’s money lender; they owe you money you worked for, so they should find a solution to their cash flow problems as soon as possible.

When ending a customer relationship is not the best option

For many freelancers, having to deal with poor payment behavior makes them so fed up that they eventually decide to end a customer relationship. Although that is fully understandable, sometimes it can be a good idea to pause before making the break with a client. Having to wait for your money is never fun, especially when there’s a huge amount of money due, but there can be some reasons to count to ten:

On the other hand, if companies are lying or continuously keep you in suspense, you would do better to collect your money and then say goodbye (if you still want to). Lying is an indication of poor business ethics and being too patient can leave you with a considerable cash flow problem yourself.

In the past I have seen great examples of what patience can do. I must admit that I am sometimes too soft in collecting money and being too patient with clients, but on many occasions it has paid off.

I remember the summer of 2013 when a client contacted me because they had run into payment troubles. While I was owed a good sum, the accountancy department reached me out to tell that they had ‘not the best news’: there was a ‘temporary challenge’. I received an email with an explanation and a question about arranging a payment plan as well as a promise to pay ‘a generous interest rate’. 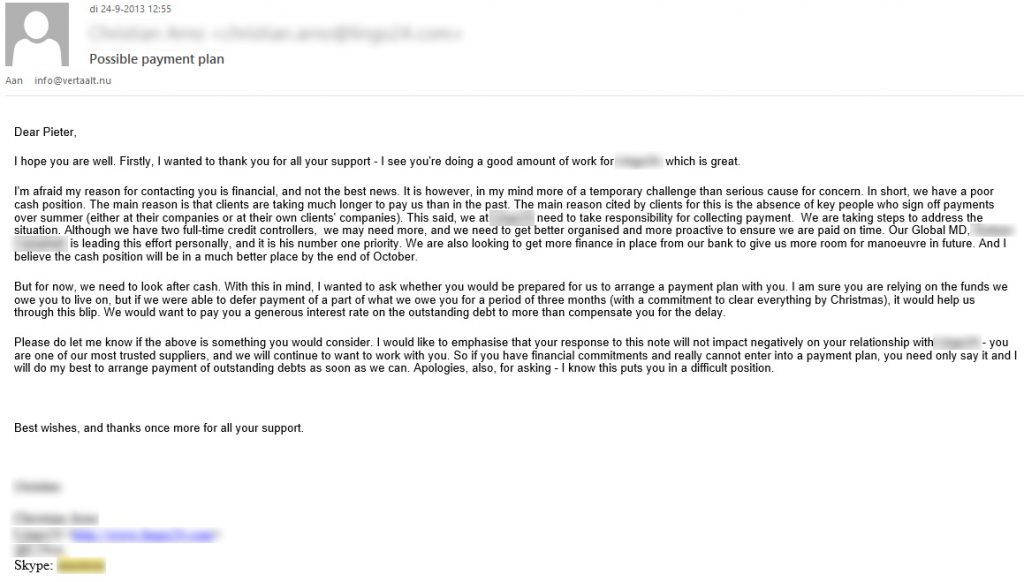 While this email was initially somewhat shocking and created a sense of discomfort I finally decided to wait and see. The customer greatly appreciated that. The troubles were resolved four months later and we arranged new terms, which have been adhered to until now. After seven years of collaboration, we still work well together on a regular basis.

A somewhat rougher situation occurred during the same summer when I was working for a big creative agency from the UK. After about a year of great collaboration it suddenly ran into payment troubles. There were large amounts outstanding and many translators started to complain about them at the ProZ.com Blue Board, a great resource to use in checking the reputation of translation agencies. Emailing did not work out and in a panic I decided to call the CEO (who, in the meantime, sent me an email to sponsor his charity). He called me back and when pressed to pay, he fell speechless. After adding my complaint to Blueboard as well and eventually threatening the company with a collection service, I finally got paid.
It was then to my surprise that a couple of months later an employee of the company reached out to me to ask for further collaboration and for removal of my Blueboard comment. While I was initially somewhat reserved, I accepted and after some time of critically monitoring our relationship, the collaboration and payment turned out to be better than before.

So far these are my lucky stories. Of course I have also had times in which I had to say goodbye to clients. There were also occasions when I had to shred irrecoverable invoices. Sometimes even now there are instances when I fear that my work will go unpaid. In those cases I usually wish I had stepped back earlier. In many cases however the reasons for poor payment are still beyond the client’s control.

That was not the case with TekTrans, a translation agency from Spain (no naming and shaming here, but the company is not in business anymore). TekTrans was one of my first clients and it opened the way to great jobs and great companies. When the company first ran into business troubles, I had €15,000 of invoices outstanding. Repeated reminders and angry emails did not result in any payment, but after more than a half year of persistence all amounts were paid. That was November 2011.

In January 2012 a new project manager at TekTrans sent me an email asking whether I was up for further collaboration. I agreed but stated my own terms. After some email discussion we agreed on jobs and payment and on collaborating as before. The company soon ran into troubles again and with €5500 outstanding I decided to stop and wait. Invoices were paid slowly, but finally I earned €5100. For the remaining €400 I contacted a collection company, which started a procedure to recover the money. However, after half a year of pressure I received a disappointing email: while promising repeatedly to pay, the company had gone out of business, and I would never see the €400. Ultimately, I had fallen prey to a predator.

There is a saying that everybody deserves a second chance. In my life as a translator I have received second chances a few times and they have paid off. That is why I would give my clients a second chance as well. However, when it comes to payment, there should be a deliberate decision behind giving poor performers a second chance. Being too naive can leave you in the end with a massive debt and subject to an even bigger deception.
Only give poorly paying companies a second chance when you really expect that they will prove to be better than their past performance. And learn from the TekTrans example that nothing is certain in any case.

Why bulk discounts won’t work in the translation industry

One hundred per cent matches: the golden egg?

When ending a customer relationship is the best option

The fun of etymology