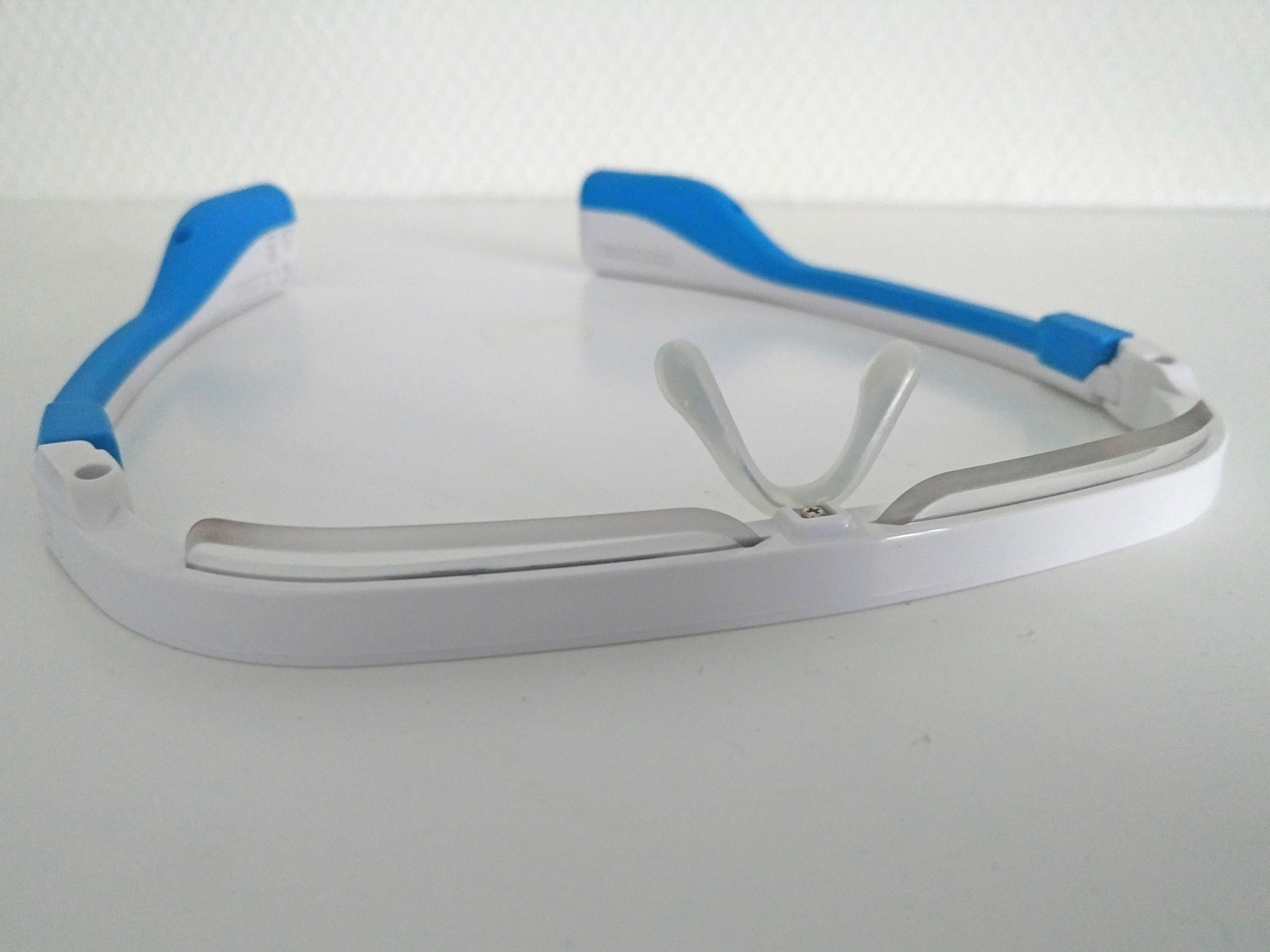 Everybody who is active within the translation community knows one common threat to all professionals as they work day and night to translate text for their clients. Working intensively and thinking all day long can lead to a feeling of exhaustion and energy loss. But for all these people trying to fight low energy levels there is the AYO Wearable. This article is an xl8 review of the AYO Wearable.


What is the AYO Wearable?

The AYO Wearable was introduced in 2015 as a “Light-Based Personal Energy System” at Indiegogo, meant for users to boost their energy levels and combat jet lag (i.e. by adapting to new time zones) or change sleep habits. The crowd-funding campaign ended successfully with a total of about $370,000 pledged by backers from all over the world.
The Wearable’s form factor is like that of glasses and the device is used in that way. It needs to be activated with a dedicated smartphone app, and then it will emit blue light. That blue light is the same blue light we all know from our smartphone and tablet screens: it is the evil light that prevents us from falling in sleep after we have been busy all night long sending messages, checking mail and watching videos. The AYO Wearable however emits that same blue light at our cornea at a much higher intensity, which unlocks a chain reaction in our endocrine system. The AYO Wearable’s light has a specific wavelength which causes optimum activation of melanopsin, a hormone that communicates with our internal rhythms and boosts our energy levels.

After I expressed my interest, the company behind the AYO Wearable sent an AYO for review. The AYO Wearable is offered at a price of $299, which is not that cheap. It comes in a funny pill-like box which includes a built-in charger. That makes the AYO Wearable easy to take with you wherever you go. At the same time it is a pity that no charging cable is included, so you always need to take one with you.
The AYO glasses have an attractive slim-line design which features an almost no-glasses look, being only a small plastic strip from which the blue light is emitted. Thanks to the flexible nose-piece, it can be used by almost everyone and the nosepiece can easily be adapted to your personal features. A great aspect of the Wearable is that it can be worn over a regular pair of glasses so you won’t lose your vision because of a much needed energy boost.

In order to start using the AYO Wearable, users should first link it to their GoAYO app. That procedure is not very difficult, but it requires you to enable both Bluetooth and Location services. While the Bluetooth feature is easy to understand, the Location service is definitely not and also raises some questions about the data that the device collects. After the AYO Wearable has paired with the app, using it can begin. This is a matter of putting the device onto your nose, setting a program and carrying on with your life. Fitting the AYO Wearable on your nose, however, requires some attention: if the AYO is put too low on your nose the frame will block your sight. On the other hand, the blue light won’t reach your cornea if you put it too high. So positioning it requires some attention, but once the best fit is found, you can bend the nosepiece to make sure that you do not need to reinvent the wheel the next time around.

On first use, the AYO Wearable requires some time to get used to. The blue light shining all the time right before your eyes makes all other things around you look somewhat orange. That orange tone was not noticeable after some time of use, so I bet this is something you could get used to.

The blue light shining all the time right before your eyes makes all other things around you look somewhat orange.

Does the AYO Wearable work?

The most important question of the AYO review is, of course, whether the AYO Wearable does its job. Does emitting blue light right into your eyes boost your energy levels? In my experience, that depends. I have been using the AYO glasses for a couple of months now, sometimes using them while doing nothing and sometimes while working. First of all, users should not expect to feel a kind of energy explosion right after starting or finishing a program. During the process the melanopsin levels are increased gradually so you won’t feel reborn instantly. In the past few months, I have definitely seen some instances of feeling better after using the AYO Wearable, but there were also some instances in which I didn’t feel noticeably revitalized. That raises the questions of whether my energy levels were too low to be improved by a 40-minute session (I had definitely felt exhausted), whether I did not use the Wearable in the right way (too high for instance) or whether it just did not work out. The idea of an energy-boosting wearable is nevertheless attractive and I do not feel that the AYO Wearable failed to do its job. In January I also wrote about the technical aspects of the AYO Wearable for Reformatorisch Dagblad and the Dutch importer then told me that he too did not know whether to attribute feeling better to the AYO Wearable or to a cup of coffee.
On the other hand the AYO Wearable is classified as safe, so using it won’t hurt your health.

Review of AYO Wearable
Conclusion
The AYO Wearable is an interesting device for translators and other professionals seeking a way to improve their well-being or to adapt to different time zones while travelling all over the world. The Wearable is very portable and does not harm your health. But while the technology behind it is sound, the real effect of it is not easily measurable and sometimes seems to fail. The usage of location services to do its job is a privacy concern that needs to get sorted out. For $299 the AYO Wearable can be of use, but the results are not clear enough for an outright recommendation.
Design9
Functionality7.5
Usability8.5
Durability9
Price7
Reader Rating25 Votes4.5
Pros
Slim-line design
Innovative concept
Easy to use
Can be worn with glasses
Cons
Privacy considerations
Results not always noticeable
Expensive
8.2
AYO Wearable Review
Buy AYO at Indiegogo
Visit the website
by Pieter Beens
0
1

xl8 review
Dozens of languages at your fingertips

Next post Three tips to improve your productivity as a translator