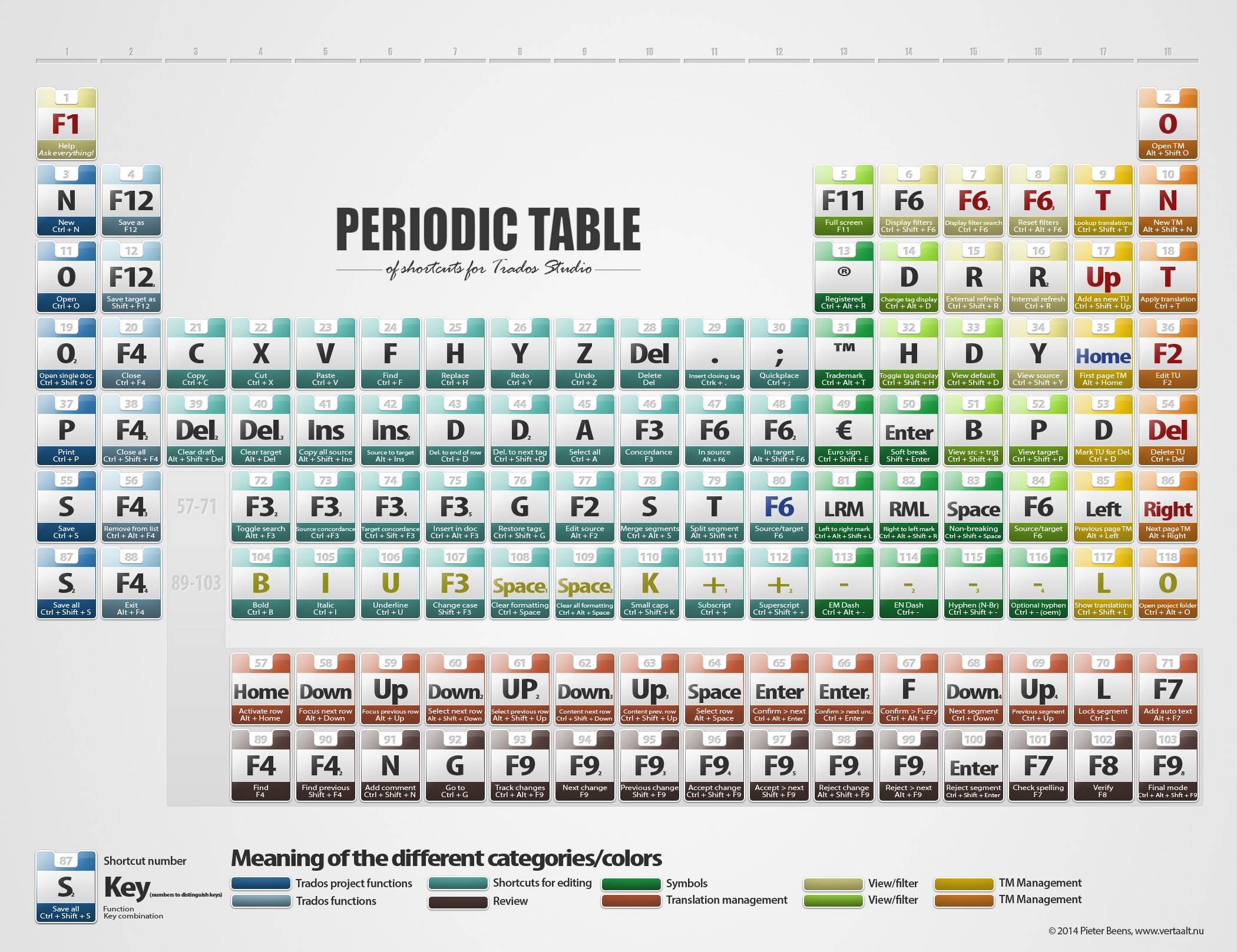 The Periodic Table of Trados Shortcuts

We all know the Periodic Table of Elements. That table we learned about in secondary school: an overview of gases, metals and other stuff – as far as I remember. I am not a beta so all I know is that it exists.
As a freelance translator I do not have to know that table although I think it’s good to know about it. To do my job properly I need to know what CAT tools are, what I am talking about in terms of subjects and terminology and how I can work efficient and profitable. That’s where Trados comes in.
Although I own over 7 free and paid CAT tools, I use Trados most. In my humble opinion it is not the smartest CAT tools in terms of algorithm and logic but it is fast and very popular and demanded by many translation agencies over the world. Trados Studio 2014, for which I bought an upgrade including AutoSuggest Creator, is much better than Trados Studio 2011 which I used for some years. I will write about it later. Let’s speak about Trados shortcuts now.

To improve your workflow and speed up your translation process, Trados Studio has many build-in shortcuts. Many of them are well-known, like ‘Ctrl+A’ to select all and ‘Ctrl+B’ to make selected text bold. Of course, every translator knows that ‘Ctrl+Enter’ will confirm the translation after which you will go to the next untranslated segment.
The less obvious Trados shortcuts are those shortcuts that are dedicated to the translation workflow, like ‘Ctrl+Alt+S’ to merge segments and ‘F3’ for concordance search.
Trados selves comes with an overview of Trados shortcuts but that’s monotonous and black and white.
To make it a bit more fun I developed the Periodic Table of Trados Shortcuts: it’s first and foremost fun but after that it can prove useful as well. And thanks to the colorfulness you will always have a nice, scientific looking, attracting wallpaper! *Sales mode off*
All shortcuts are organized according their function. So, you don’t have to look at all those 118 shortcuts to find the one you’re looking for.
You can view a preview here.

So time to download the Periodic Table of Trados Shortcuts.
You can download it as a JPG file or PDF file (or both). Downloading is free, like spreading.
Copyrights are for me, of course..
Please download it below and feel free to share any comments, like enthusiasm, hints and your favorite Trados shortcuts below.
Enjoy!