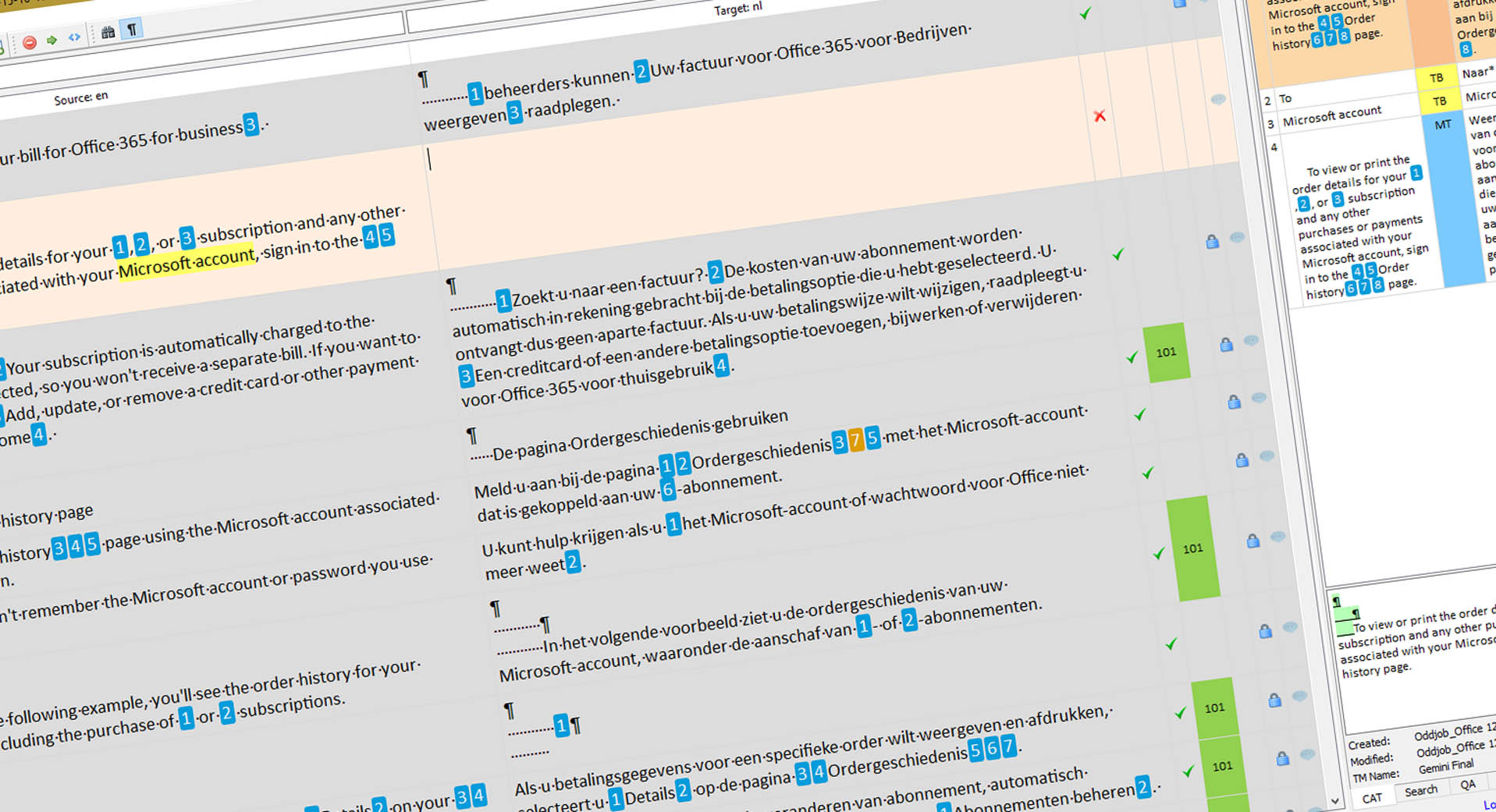 Of all the CAT tools that are used by translators, Trados and MemoQ are among the most popular. In nearly all surveys and polls on CAT tools used Memsource is ranking at the bottom, along with other tools like Swordfish and Wordbee. Nevertheless, Memsource is a very useful tool when it comes to translating general documents. In this Memsource review I highlight the pros and cons of Memsource for freelance translators.

Memsource is a CAT tool like Trados and MemoQ, but there are only a few translators that invest in the tool. There is a practical reason for that, which is uncovered later on in this review. Nevertheless, usage of the translation tool is rising among translators.
Memsource was developed by a company with the same name, which is headquartered in the Czech Republic. The tool only came to light in 2010 and was introduced to the general public in 2011, which makes it a relatively new player in the market for CAT tools. Yet according to Wikipedia, in 2017 it reached 200,000 users and is processing over 1.5 billion words per month.

Memsource is entirely based on the cloud. A cloud-based CAT tool enables project managers to upload and convert a number of filetypes, which afterwards can be assigned to translators. Translators can then accept and download the files in mxliff format and translate them in MemSource Editor. If they prefer not to work offline, they can simply click on the link on their Memsource dashboard and work in their browser. It is a great benefit of Memsource that the web-based interface mimics the MemSource Editor almost entirely – even the shortcuts are identical. That results in an easy and native-like user experience, no matter whether translators are working online or offline.

If translators prefer to work offline, all they need to do is to download the free MemSource Editor (note the inconsistency in writing Memsource and MemSource in this Memsource review: Memsource is the name of the company and service, but their editor is called MemSource). This lightweight tool weighs ‘only’ 44 MB, which is much less than many of its competitors. The MemSource Editor is available for Windows, Mac, and Linux systems.

MemSource Editor is nevertheless built around the cloud. Translators can/should sign in with their username and password in the editor in order to have access to the translation memory and term bases. If they do not sign in they can translate their files, but the segments are not stored in the online translation memory, they cannot benefit from the terminology, and trying to confirm a segment triggers an error. 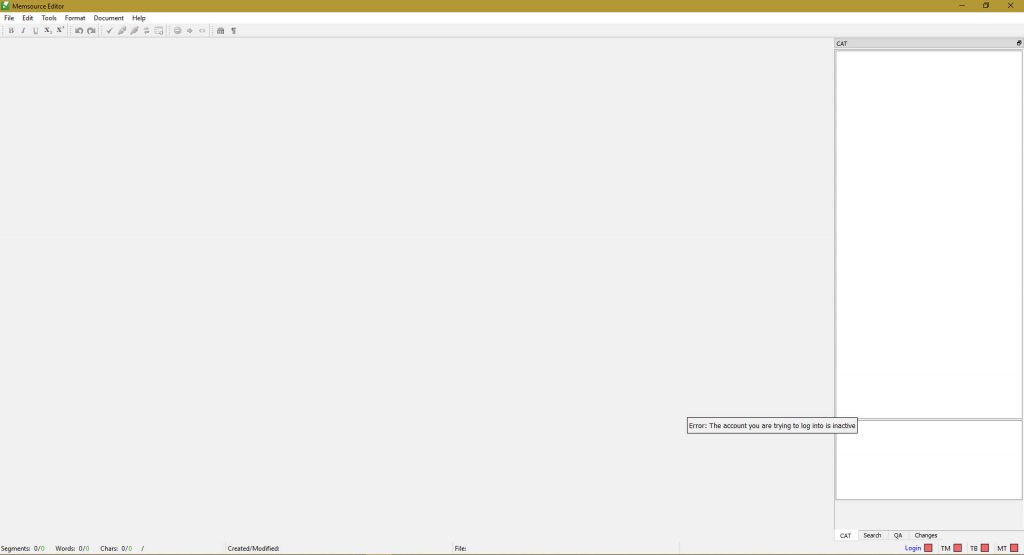 The most striking feature of MemSource Editor (and its online compeer) is the clean interface. The editor contains five parts: a menu with a single tool bar underneath, a main screen with the content of the mxliff file, and a sidebar with segment and terminology matches, as well as a search and QA feature and an overview of changes made by a reviewer. If a file contains tags for formatting or placeholders, they are simply numbered and can be inserted by using the F8 key. All in all, using the MemSource Editor feels very simple and intuitive and the tool uses almost no memory resources. The only time it needs is for reading segment matches that are stored in the cloud – and even that happens in a wink. Storing confirmed segments goes unnoticed, which is a great benefit over SDL Trados and MemoQ.

Another great benefit of MemSource Editor over competing CAT tools is that the software does not require users to store their translations regularly. The editor has a background process that saves the file immediately. If MemSource Editor crashes (which has happened only twice in the five years I have used it), users can simply find their file and re-open it to continue with the next segment. 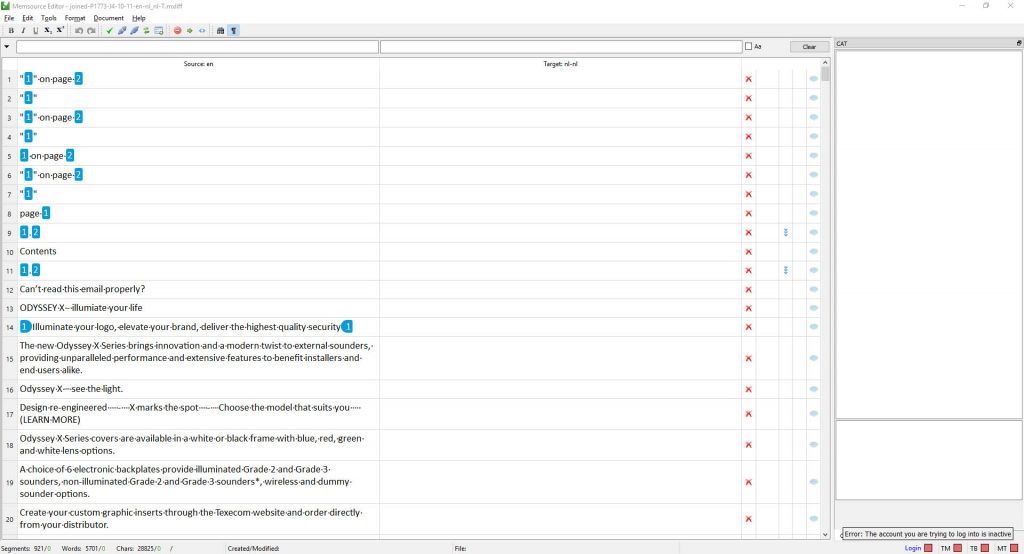 So MemSource has enough to offer to translators: a lightweight and fast interface and only one file type that can be translated both online and offline. On the other hand, the tool offers freelance translators limited possibilities when it comes to translation memory and term base management. In most usage scenarios translators are requested by their clients (most often translation agencies) to use Memsource for a particular project. The project manager will then create a Memsource account and direct the translator to download the free MemSource Editor. While the editor and the account offer access to translation memories and term bases, translators cannot add their own memories and glossaries to projects. They therefore not only have no leverage from other projects, but they also cannot store translations from particular projects in their own memories. (Luckily, I have described a workaround here.) In other words: translators are only working with files from the client but they have no control over anything they translate.

Another major caveat of Memsource is that it requires a different account for every single client. If a new client comes up with a new project, they need to create a new username and password. That is not only confusing while accessing the dashboard (I have about eight different accounts at the moment), but it is even more frustrating because users should log in and out in the MemSource Editor, which does not store usernames and passwords. Life would be easier if accounts could be linked or if MemSource Editor would offer a method for storing usernames and passwords.

A last thing to mention is that MemSource Editor works with auto-propagation. When users translate a segment, the translation is automatically applied to 100% of matching segments. While that in itself is not a major problem, it can result in mistranslations and contextual problems – an important point that seems to be overlooked both by Memsource and by clients (who pay less and risk faulty translations).

It was mentioned before: Memsource users need to work with only one file format, the mxliff type. This file type is based on the popular xliff file type for bilingual files. It is a huge advantage of Memsource that users (translators) can download files one by one as xliff files or join them all in one xliff file without risking internal file errors and other problems (something that sometimes happens with Trados Studio). While the mxliff file originally was not supported by Trados Studio, users can simply add the extension to the list of allowed file types to open mxliff files in Trados Studio as well (please note that segmentation information should not be stored in order to avoid problems). Once mxliff files are opened in Trados Studio (or in MemoQ or any other CAT tool), users can simply follow their preferred workflow to translate their files. Tags in the mxliff source are simply displayed between curly braces with a number (for instance, {0}, {1}, etc.) and can be inserted by typing or copying these character combinations to the translation. Memsource will then automatically convert them into tags. 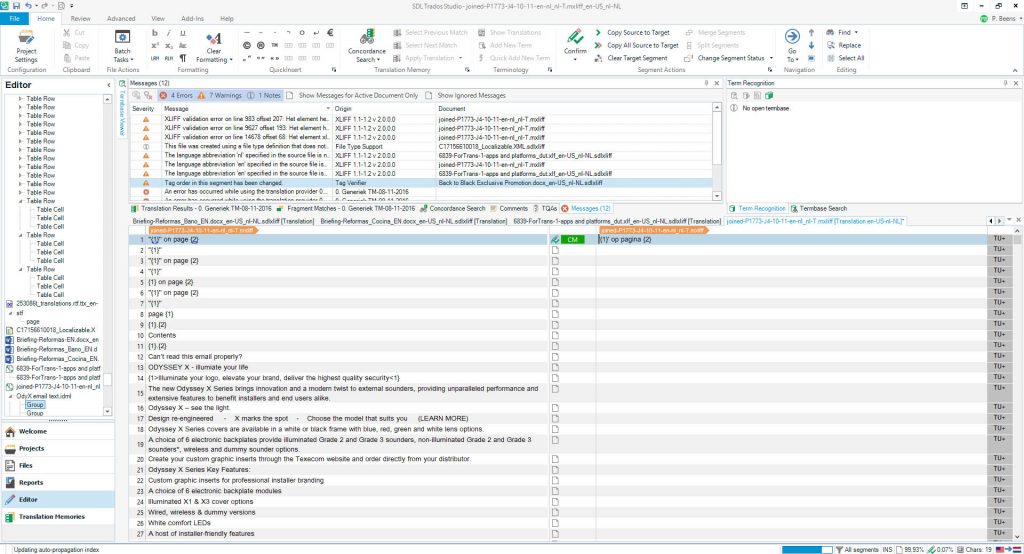 Using Memsource mxliff files in other CAT tools has the added benefit that users can leverage their own translation memories and term bases. On the other hand, they cannot follow terminology guidelines provided by the client. After storing the target file all segments need to be confirmed in the mxliff file (simply open, press Ctrl+Shift+A and confirm by hitting Ctrl+Enter). It is advisable to run a QA (F9) in order to avoid formatting problems from typos in the hand-typed tags.
MemSource Editor itself does not allow other file types to be opened.

This Memsource review covers different aspects of the cloud-based CAT tool: usability, control, and compatibility. Generally speaking, Memsource is a great addition to the translators’ toolbox, offering a great, intuitive user experience in a lightweight tool. Memsource is often offered as part of a translation project, where clients pay the monthly fees and translators can use the editors, TMs and TBs, for free.
Translators looking to invest in a CAT tool can benefit from the many possibilities Memsource offers but given the nature of the tool, its options, and its pricing model it could be more affordable to invest in a stand-alone tool like SDL Trados or MemoQ. These CAT tools are heavier in terms of resource usage but offer more control and do not require use of an online environment for file and TM management. If a client offers Memsource as a CAT tool however, do not dismiss it: the learning curve is not steep, while the file compatibility still offers an option to leverage own translations. And that the tool is free for translators is a great benefit as well. 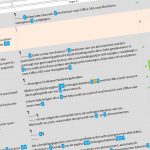 Memsource review: the silent power of Memsource
Conclusion
Memsource is a fully featured and light-weight CAT tool that offers many possibilities to translators. Unfortunately it does not offer freelance translators control over translation memories and term bases, which makes it difficult to leverage translations from other projects. The file compatibility compensates for that however by making it possible to translate Mxliff files in other CAT tools.
User interface
Functionality
Compatibility
Pricing
Productivity
Reader Rating5 Votes4.35
Pros
Light-weight
Consistent user experience online and offline
Clean user interface
Great compatibility
Single file type (no problems with difficult file types)
Cons
No control over translation memories and term bases
Different accounts for each client
Auto-propagation by default
4
Rating
by Pieter Beens
3
4

Design your business in 365 days