Home / Kitchen sink  / Is a ProZ.com membership worth it? 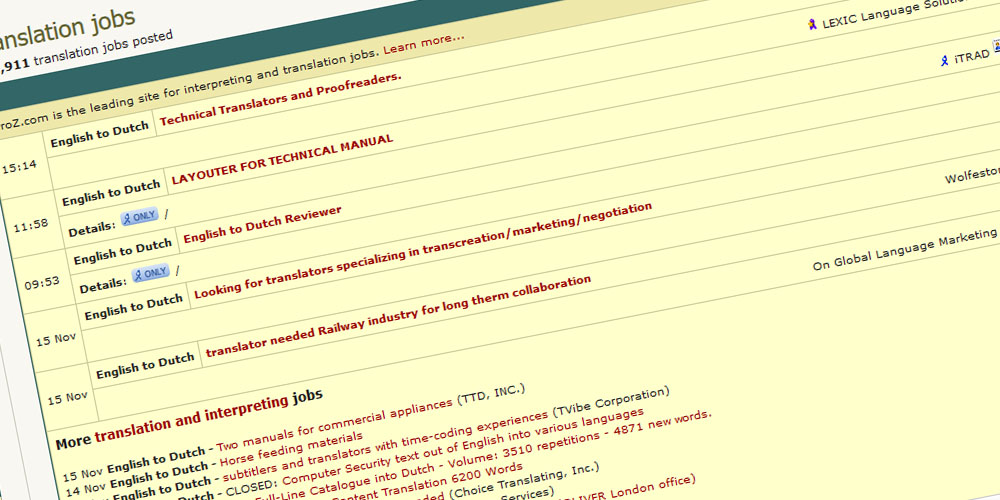 Is a ProZ.com membership worth it?

This week ProZ.com activated the ProZ.com Plus membership the website recently announced. This new membership of the biggest translation community should add extra value to dedicated members, but it can also be a sign that ProZ.com is struggling to bind its members or to tap into new groups. Indeed, the added value of ProZ.com for translators has been contested for many years now. Hence this article on the question that is heard around the internet: is a ProZ.com membership worth it?

For translators looking for work, ProZ.com is beyond far the biggest marketplace out there. Although there are other alternatives, the website has established a position as the leading marketplace with many additional features and options. Therefore ProZ.com is first and foremost known as the translation marketplace with the same domain. The website, founded in 1999, now counts 839,683 members and 17 employees according to these statistics.
However, ProZ.com is much more than that. The website is, in fact, run by a company founded by Henry Dotterer, the CEO of ProZ.com. The website offers training courses to members, keeps a massive database where translators can find more about the payment behaviour of potential clients (the ‘Blue Board’), and even hosts a system where translators can invoice their clients and generate service agreements.
In addition, it organizes group buying activities every now and then where members can buy discounted CAT tools and other business software for translators. 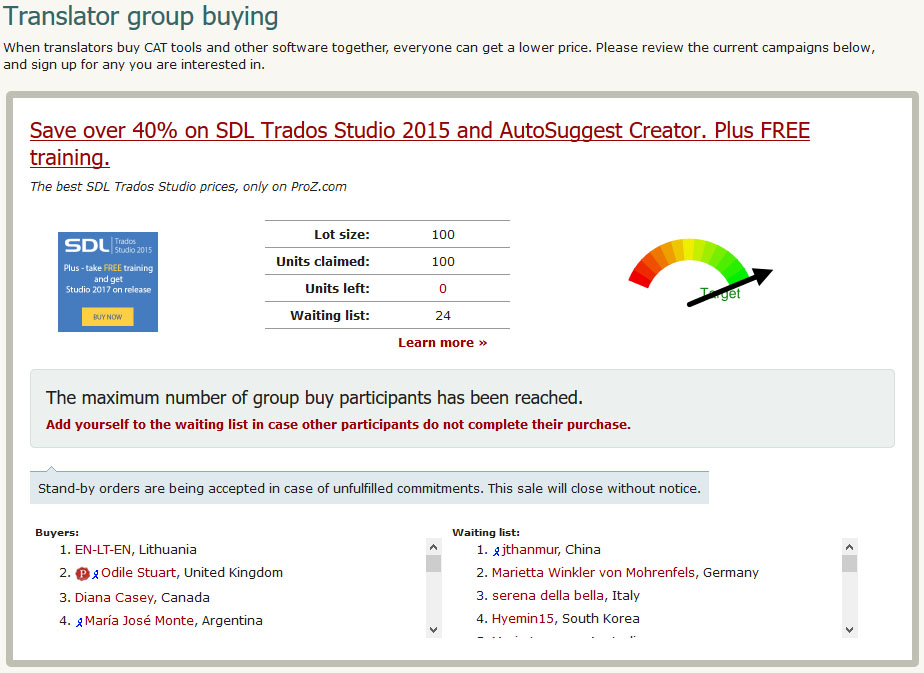 Until recently ProZ.com offered two memberships: a free membership with limited access to jobs and functionalities, and a paid membership with fast access to jobs and many tools for translators. For $120 USD, or $10 per month, translators can quickly quote on new translation jobs and gain new clients.
There were some things however that paying members did not like. Some of them did not generate a real return on investment while others disputed business choices by the leading translators’ community. Dmitry Kornyukhov writes in his post ‘Is Proz Dead or Alive?’ about his experiences with ProZ.com: how he loved the website until he came to realize that there was much more to win in terms of money outside the website because rates for translators are low in that specific marketplace. Loek van Kooten, another translator, writes on his website that ProZ.com is corrupt after he lost his ProZ.com badge for having not complied with the website’s terms. And Kevin Lossner recounts on his website a story from a colleague who stumbled upon ProZ.com’s bureaucracy in a way that was not to be expected from a professional website.
When looking at the internet, there are several blog posts with complaints about rude behaviour by ProZ.com employees and translation agencies, and about experiences in which the website does not offer any added value to certain translators. The most important of them seems to be the fact that the demand and offerings on the website seem to contribute to ever lower rates for translators.

Earlier this year a new complaint was added when ProZ.com acquired TM-Town, a website where translators can buy and sell glossaries; it had also invented a technology to link the right translator to each job. Translators asked what the acquisition would bring and why ProZ.com had joined forces with TM-Town. Others feared that this acquisition would allow their valuable TMs into the hands of ProZ.com, which could use them for its own interests.

My experiences with ProZ.com

I started with ProZ.com myself back in 2011. Until then I had never heard of the website and found my clients via a local website for freelancers, but when a client asked me for my ProZ.com profile I became curious and signed up for a free membership. Because of the delay in quoting on interesting jobs and seeing suitable jobs being closed before I was able to offer my services, I soon signed up for the paid membership. That paid off: within three months I had made more revenue from a single client than I had barely made in the full year before. ProZ.com gave me value, both in subsequent jobs from clients with whom I have built a sustainable relationship since, and in offering insights into potential customers that have enabled me to make informed choices about whether to quote on a job. Last year, I was finally able to find a client for book translations – something I did already but never to this extent.
Apart from that I started to contribute to ProZ.com by creating my own courses and I also published some articles on the website. In December last year ProZ.com and I even jointly hosted the ProZ.com Drive, a fundraising campaign for charities.
Since that fortunate choice in 2011, I have been able to find many interesting clients, participate in dazzling projects for great companies worldwide, and connect with many great colleagues. Sometimes I made a mistake, was confronted with agencies that did their utmost best to urge me to lower rates, and went to sea with customers I should never have trusted, but those are the ordinary problems translators face. In short, I have never felt any pain in paying for another year at ProZ.com because I experienced the many rewards that it brought me from a business and professional perspective.

It is interesting to see that during my first years as a ProZ.com member I mainly came to know clients through the default job postings. Now that I am five years underway, more and more potential clients are finding me by the directory service: I am approached directly by far more companies with translation jobs than before. On the other hand, there are many of them who do not invest in approaching each individual translator personally but simply send out a mass email to see what fish they can catch, which doesn’t contribute to a feeling of being honoured by the profession.

The new ProZ.com Plus membership package 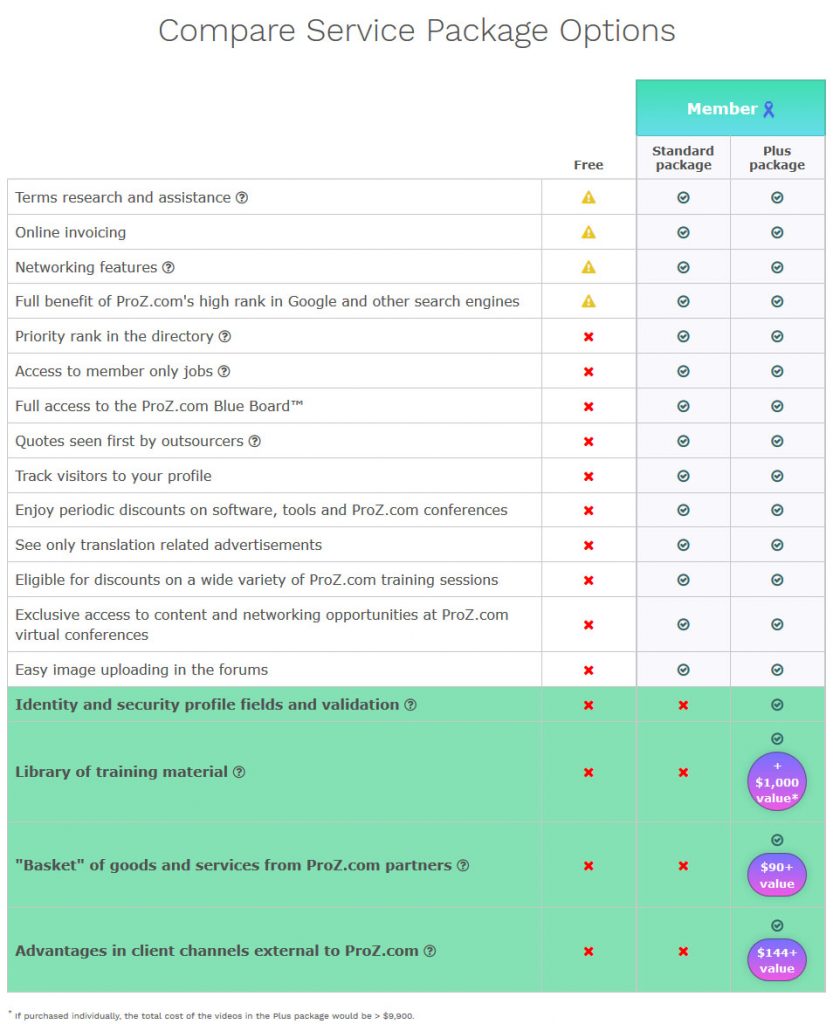 The Plus membership package is clearly new in that some features are to be determined in the future. The identity and security profile fields do not seem to add much value above the standard membership, while the related TM-Town account is not of value for each and every translator. ProZ.com promises to offer ‘advantages in external client channels’, but that is too vague to see any looming benefits.

I nevertheless decided to give the Plus membership a go, simply to see what comes from it. In the past, a standard membership brought me so many clients that I have stopped searching for them, but the Plus membership package, including the video library that was announced yesterday, could help in terms of resources and training.

Why ProZ.com should improve

I am not sure why ProZ.com is introducing its Plus membership, but the company is clearly on the move. That is a great thing as the company should move on with changing practices and habits among translators. The introduction of The Open Mic with its article platform, knowledge sharing, translators directory and plans for forums – all free at the moment – makes clear that translators do not rely only on a single or established website anymore. At the same time ProZ.com has grown so big that it is attracting critiques from disappointed and sometimes perhaps poorly treated members.

Now it should be time to renew the design a bit so the website is more accessible on newer platforms, and bigger and smaller screens. The introduction of the new ProZ.com mobile app is a first great step in that direction, so translators can find new jobs, ask questions and participate in discussions on the go.

ProZ.com also introduced the ‘What I’m working on’ feature that enables translators to share projects they are currently working on. It is a tiny – but to some extent popular – step to transform the website into a platform with more social networking features. Without the introduction of features like these, the website will certainly lose contact with the community, which is already looking for other ways of sharing knowledge and experiences, like via The Open Mic, special Twitter hashtags and dedicated Facebook groups.

Is a ProZ.com membership worth the investment?

Let’s go back to the main question of this blog post: is a ProZ.com membership worth it? In the last years I have heard many different replies most of which were not so positive. The recent developments of ProZ.com make clear that the website is trying to secure its position as the main website for translation and interpreting jobs. A massive giveaway campaign in which even a car can be won should attract as many subscribers as possible. To me the ProZ.com membership has proven its worth in the past years and downgrading to a free membership would certainly be a drawback.
While money is often a difficult thing for translators, that $110 would certainly be worth a try as it can be returned with two small jobs from potentially ongoing customers. And if it does not even have that return on investment, then there are always the possibilities of connecting with colleagues, proving your value as a translator by answering KudoZ questions, or benefiting from free and inexpensive courses (or creating them yourself).

Kitchen sink
How many CAT tools should you need?

Previous post How many CAT tools should you need?