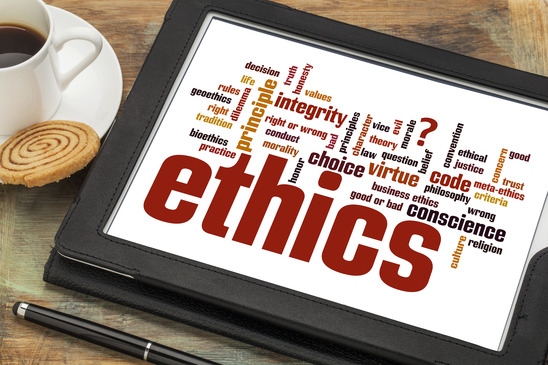 How to deal with ethical dilemmas for freelance translators

A couple of weeks ago a colleague proudly mentioned on Twitter that she was working on an exciting project. Right after breakfast she would start working on the translation of something to do with adult toys. I was a bit surprised. Apart from the fact that I won’t take on such projects I would also be ashamed if it were publicly known that I had. I bet that for proper use, even the manual of such a ‘‘toy’’ should be translated by professionals who would not want to risk something with inverse polarity resulting from improper translations), but then I would prefer the discretion that surrounds much of anything to do with it.
The tweet of that honoured colleague taught me that conscience and scruples are personal matters. In the same week, however, I learned that not everything can be anticipated.

Via Proz.com I applied for a job recently that was mentioned a ‘IT translation quote request’. Together with a colleague for editing I won the bid and received the instructions. The email also contained a sample of the strings to be translated: ‘Cash Account’, ‘Cash Balance’, ‘Commission’ and so on. It seemed that this was ordinary bookkeeping terminology. When I started working on the translation I soon arrived at strings with terms like ‘bid’, ‘Casino’ and ‘coins’. I felt lousy because I have always turned down casino and gambling translations. I have my own objections against them and won’t get involved in them. And because I don’t know any of the terminology I cannot guarantee quality either. But now I had already accepted the job on the basis of a couple of strings and the deadline was approaching. What could I do?
Long story short, I finished the translation in time and started celebrating my weekend. When I opened my email on Monday I had a message from the editor: ‘That’s just my luck: a real pyramid scheme. I wish I had known this before.’ That was how I felt: if I had known before that this was a pyramid scheme I would certainly never ever have accepted it. Now it had the name of an IT translation with only strings – no description, privacy disclaimer or FAQ whatsoever but just a bunch of silly strings for an illegal scheme.
Should the client have known that? I am not sure but I am sure that the ‘IT and software strings’ and the sample strings were not as innocent as they seemed.

The importance of correct job descriptions

A great benefit of job descriptions is that they often explicitly state what they are about. Job providers require translators with knowledge in a particular field and want to guarantee their clients a quality translation. By stating that they need a translator with experience in the casino/gambling field they make sure that they receive quotes from the right professionals. No matter how complex an adult toy might be, posting it as a ’technical’ translation won’t be beneficial for either the translation or the agency–translator relationship.
However, as the example above shows, there is always some room to tamper with job descriptions. Selling an illegal or ethical wrong job by providing an innocent description is misleading – but some agencies simply happen to do it.
In this case, the agency simply lost my trust. Even if they were unaware of it they should simply have known what jobs they were taking on before delivering them to their vendors.

During the pyramid scheme translation my unrest grew rapidly and I wished I had never accepted the job. Of course money is important for my living but I prefer to live with a good conscience rather than with money earned by working for a product I cannot support from an ethical point of view. At the same time, however, I also felt it was important to complete the job on time. The client selected me on the basis of my experience with IT and trusted me to deliver a proper job in due time. Turning it down in the midst of the project would leave him with troubles which I deemed unacceptable. I have never turned down or returned a job after accepting it and I want customers to trust me on that. Although I didn’t like this way of working I thought it was important to meet my obligations.
That applied to my colleague as well: refusing a job because it was not what it promised to be seems to be as wrong as offering a misleading job. But is it?

How to deal with issues of conscience as a translator

The benefit of working as a freelance translator is that you can choose when to work and what to work on. That should offer you some degree of freedom of conscience – to take on jobs you can support from an ethical point of view and to turn down jobs you don’t like and that cause scruples.
However, as the example above shows some unexpected situations can arise in which you are in the middle of a conscience conflict and you’re forced to be at odds with your conscience. These situations not only apply to adult toys and pyramid schemes but to a range as broad as all consciences together, whether it be about abortion, euthanasia, the defense industry or some kinds of medicines. Basically, you have three options.

1. Simply forget that you have a conscience

The easiest way is to ignore that you have had problems of conscience with similar jobs and issues before. You simply do the job, whether you intend ever to do similar jobs again in the future. This way you have security of work and income and you safeguard the relationship with the client, but there is a risk that you lose your credibility or that you will run into further conflicts of conscience at a later moment.

2. Turn down or give back a job

An option that certainly leaves you with much more trouble is to give back a job. Turning down a job won’t create much problem if you simply explain the reasons for doing so. The fairer you are in describing your reasons for turning down a job, the less likely it is that you will be offered similar jobs in the future.
Giving back a job when you have already accepted it – or even started to work with it – can lead to many more troubles. Clients can blame you for violating a contract or argue that it will put your or their relations at stake. If it really is an issue of conscience you should accept that this situation can be the end of your relationship with the client. On the other hand, you can also earn honour and credibility by being honest and ethical. In the end, this can lead to a much better relationship – or at least a much better feeling about what your job means for you from an ethical point of view.

3. Search for a middle way

So far I have sketched two extremes. Perhaps there is a middle way as well, although it depends on the situation. There is a chance that you can explain to the client what you’re stumbling over. You can then ask the client to look for colleagues who don’t mind the content of that particular job. If it is not as pressing as other ethical dilemmas you could also propose to finish the job to fulfill your obligations and to agree to reject similar jobs in the future. You might also have a colleague who is willing to do similar jobs for you, so that you don’t risk the relationship with the client while at the same time you are freeing your conscience.
The risk to this approach is that clients put your conscience to the test over and over again, leaving you in a difficult position all the time.

However, it is far better to be honest and to risk one relation for the sake of inner peace than to lose all credibility and end up with toys, weapons and pills in your business that you don’t dare tell your relatives about.

A second chance for defaulters?

Why translators should be more disruptive

Next post Translating 1,000 words per hour: is it possible?

Translating 1,000 words per hour: is it possible?