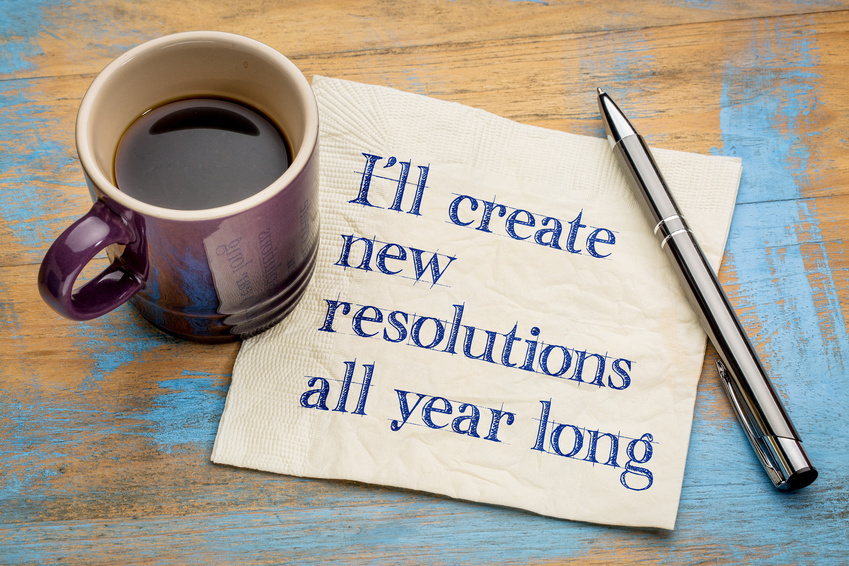 It’s the last week of December and the end of the year is heading our way at a fast pace. No matter if it concerns personal or business matters, we are looking back at this time of the year. In many cases we try to remember and relive the best things that happened, such as new clients we won and massive projects we took on. At the same time we try to forget the worse things, like clients we lost or complaints we got – no matter how unjust they were. At the same time we look forward somewhat cautiously, not yet ready to accept the stress of a new year. So this is the right moment to talk about a somewhat uneasy subject: New Year’s resolutions.

The new year is surrounded by the somewhat uncomfortable subject of resolutions. People are intent on doing more of the good and less of the bad and unhealthy, and decide to smoke less and walk more. Whatever these intentions might be, so many times it happens that the resolutions have already failed in the first week – not to mention the first day of the new year.

What applies to our personal lives applies to our business as well. In December we might decide not to work for a particular client anymore, to take more breaks at work or to work less than before. However, with the first jobs also comes the first stress and our resolutions die a silence death – sometimes only to be remembered when stress is at such a high level that we think we will be overcome by it.

When I set my business goals for 2016 in December last year, I made a path I planned to walk. I decided to work somewhat less because 2015 had seen an overload of working at all times of the day and night. At the same time I intended to spend more time doing things I really loved: visiting conferences, creating courses for colleagues and writing some viral blog content.

In 12 months I only visited one conference. I considered about two but decided not to go and my decision to use the days off to relax were rendered invalid by my last-minute acceptance of unexpected jobs.

When I failed to create a course in the first quarter of the year (my initial goal), I moved it forward to Q2 and then to Q3. In the end I decided not to do it until December. And guess what…

In writing that viral blog content I was somewhat more successful. I wrote a lot, visited different topics and debated ideas like What clients say to freelancers (and not to the baker), Is translating 1,000 words per hour possible and Is a ProZ.com membership worth the money?

However, 2017 will inherit a massive to-do list with things I should have done in 2016. Perhaps it will even survive a new year.

Why New Year’s resolutions can fail

Failing in doing things you intended to do might feel wrong and leave you with a sense of being unstable or unable to finish anything. That, however, is not what I feel when I look back at 2016 (I did not have any New Year’s resolutions on a personal level that might have helped me). This year has been a year full of interesting projects. Thanks to God I have been able to pay my debts (if I had one) and to look after my household. I won very massive (300,000 words) projects, book translations and new clients. I said goodbye to two clients I no longer felt at ease with. And after it all I had more free time than ever since I started out as a freelancer. I didn’t work many nights and even took some six weeks off – something I would never have done in 2015 and beyond.

These are the two lessons I want to share with you now, so you might use them when setting your own New Year’s resolutions for 2017.

When setting goals for the new year make a distinction between goals that you really should achieve and goals that are desirable but not necessary to achieve. You might choose to write them down in different colours or on different pages in your diary, so they’re distinctive and you don’t drown in a massive list of goals of which many aren’t as important as you might think. Invest in achieving the goals that you really can’t miss but take the other goals somewhat easier. If you want to create a course, like me, but don’t depend on it for your living you might move it forward to a moment when you’re able to complete it in full without any pain. But if you’re authoring courses for a living you can’t afford to move it from each quarter to the next.

At another level you should make clear for yourself how comfortable you are with your goals. If you set goals because you feel someone is expecting it from you but you don’t back them yourselves, you might opt to follow your own path, even when it means that you won’t achieve the goal. If you find a minor goal important for some reason (like attending a conference because you haven’t done it for several years) you might give it a higher priority because failing will result in a sense of discomfort, which in the end can break you down altogether.

A last lesson I want to share is that New Year’s resolutions can even take place in July. Setting goals for a whole year seems ambitious (and it is) but you might wonder how wise it is. Who can tell you what happens in January, February or March? You might therefore revisit your goals sometimes to see whether they should have been achieved, can be amended or should be changed in terms of priorities, your comfort with the goal and feeling and failing. The new year acts as a great moment to make a fresh start on resolutions but sometimes they simply work better in July.

Next post How to start a blog: successful blogging as a freelancer in 2017

How to start a blog: successful blogging as a freelancer in 2017