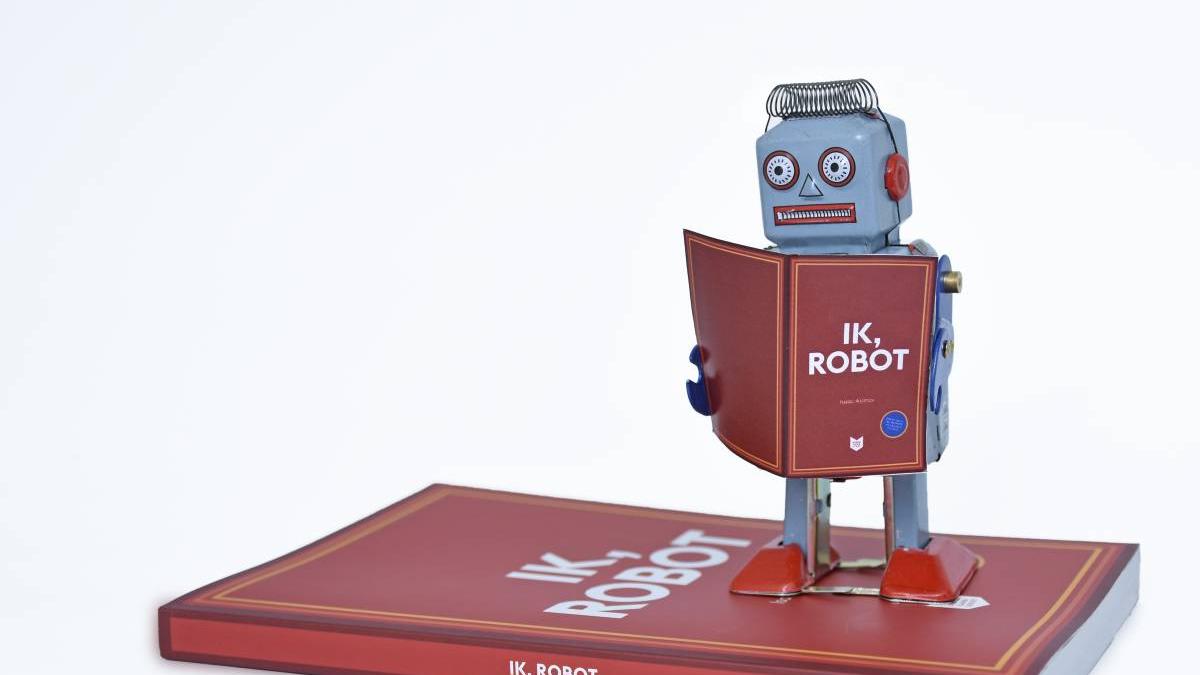 A robot as bestseller author

Can a robot write a book? Many readers will answer this question with a heartfelt ‘No’. Still, scientists from the Meertens Instituut and the University of Antwerp have developed a robot that can write a story. Considering the technology, the book-writing robot is even smarter than its translating brother. A gift book that was presented in The Netherlands as part of the ‘Nederland Leest’ campaign (meant to motivate old and young to read) contains a story that was largely conceived by the robot.

This article was published in Reformatorisch Dagblad earlier this month.

A robot that can write a book: scientists and science fiction enthusiasts cannot wait until it has reached this stage, but many book lovers resist the idea and are unwilling to entertain it. The fact that robot production lines are used or that they take over technical jobs are things that many people still want them to do. But the fact that a robot could also write a book is a bridge too far for many. The most important idea? Robots and machines can perform many standardized tasks, but are too stupid for a creative profession.

Creativity and technology do indeed seem to have little in common with each other. However, the idea that robots are stupid has long since been outdated. To discover whether robots also have a talent for creative professions, scientists from the Meertens Instituut and the University of Antwerp have developed a ‘robot’ that can write a book.
Forget about the romantic image of a blinking robot that has two fingers to rattle off a story behind a PC: Asibot is no more than a computer code that can analyze literature and discover connections. The code imitates our brains and detects patterns in large amounts of data. A sensitively constructed robot devoured hundreds of thousands of books – from famous Dutch writers like Baantjer to Vondel – and learned how to link and use them as a basis for building links, and learning sentence construction and grammar. Thanks to this knowledge and a complicated program code, the robot can independently generate new stories.

The technology behind Asibot is similar to that used in translation machines such as Google Translate. However, the robot is just a little bit smarter: it gets to know a language independently, while translation machines need large quantities of source texts and translations to identify which words belong together. While Asibot gets to know a language by analyzing one language, a ‘translation robot’ needs two to be able to speak one language.
So the robot is certainly not stupid. Yet its literary possibilities are limited. A sensitively constructed code learns the linguistic peculiarities of the books it is given and will thus produce a text that resembles the books it ‘reads’ in terms of style. 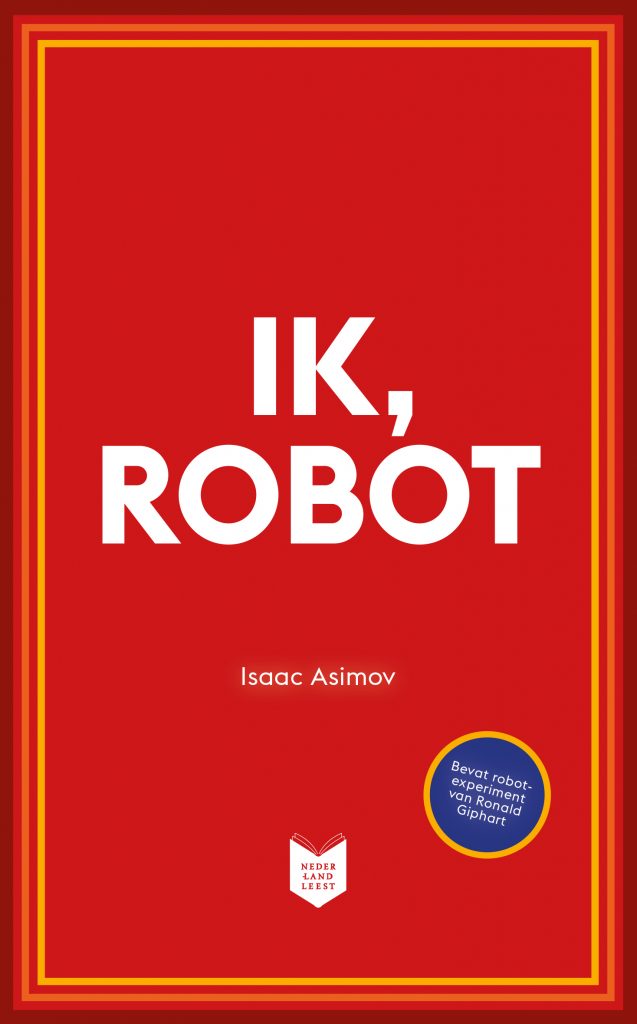 Cover from ‘Ik, robot’ by Isaac Asimov, Giphart and Asibot

That the use of writing robots is nevertheless not marginal, turned out to be the case earlier this month during the introduction of the twelfth Nederland Leest campaign. This year’s theme is ‘Robotics’ and welcomes Dutch people to read Ik, Robot, a futuristic story about robot psychologist Susan Calvin, who looks back on her life in the year 2057. This novel, by the American writer Isaac Asimov (1920–1992), followed by a short story written by the Dutch best-selling author Ronald Giphart together with Asibot.
The scientists specifically presented the oeuvre of Dutch author Giphart to Asibot for the campaign. During the writing process, Giphart typed the beginning of a sentence. The Asibot then made three suggestions. The robot thus made an important contribution to the course and plot of the story: its output always constituted new input to Giphart’s story. Giphart’s task was to transform the robot’s results – which were sometimes confused – into a well-developed story, particularly as the robot was unable to see a connection between the beginning and end of a sentence. Asibot, according to his own words, delivered Giphart “many sleepless nights”.
Nevertheless, the mission seems successful. Even though the story is a bit confused, it is not possible to determine whether many of the sentences were produced by Giphart or Asibot.

Enough to think about

Back to the question of whether a robot can write a book. The first robot novel will remain the music of the future for a while, but technological developments are unstoppable. If the algorithms are further developed, one day a machine author will be found. If that is the case, then there are still other questions. How do we read a book written by a robot? And who does the copyright belong to? The person who put the robot to work, the author whose oeuvre was used, or the programmer who taught the robot to think? These questions may provide even more material for reflection than the book of the robot itself. 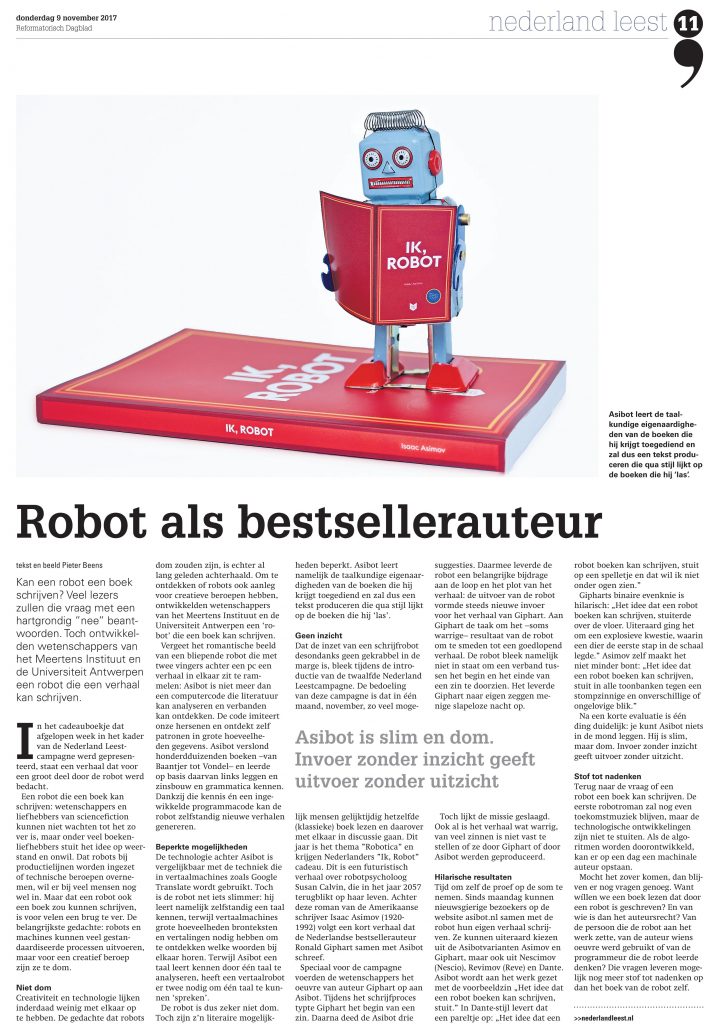 Translation practice
Two other ways to use machine translation

Previous post Two other ways to use machine translation

Next post Moving while working with the HOVR Desk Swing

Moving while working with the HOVR Desk Swing